(ATTN: UPDATES with more remarks by Zelenskyy)
By Lee Haye-ah

Zelenskyy made the request in a virtual address before South Korean lawmakers, saying Ukraine needs various military technologies, including planes and tanks.

"The Republic of Korea can help Ukraine," he said. "South Korea has the various military equipment that can stop Russia's vessels and missiles." 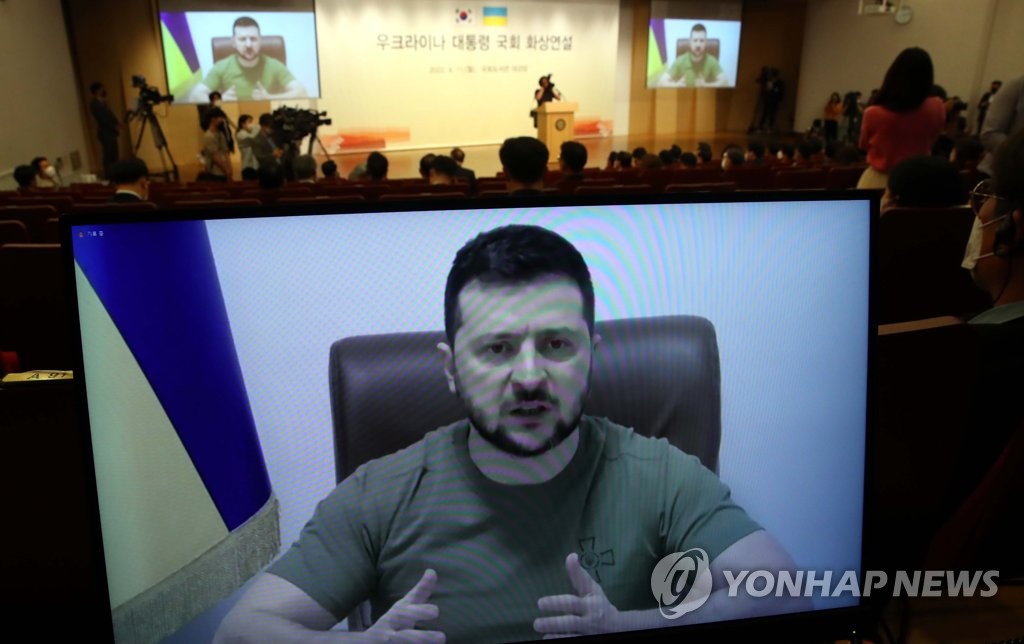 Zelenskyy thanked South Korea for the assistance it has provided so far but noted more will be needed in order for his country to survive and win the war.

"I would be grateful if the Republic of Korea could help us stand up against Russia," he said in remarks translated into Korean. "If Ukraine receives such weapons, not only will they save the lives of ordinary people, but it will be a chance to save Ukraine, and not only Ukraine, but ensure other countries are not attacked by Russia."

Zelenskyy spoke for 15 minutes about the situation in his country, including the likely deaths of "at least tens of thousands" of people in the city of Mariupol.

Before closing, Zelenskyy asked that the lawmakers watch a short clip filmed by a journalist in Mariupol.

The video showed the devastation in the city, including graphic images of weeping adults, dying children and bodies being thrown into mass graves.

"The road to the end is far," Zelenskyy said. "Russia does not plan to occupy only Ukraine. After Ukraine, Russia will certainly attack other countries."

The request came hours after South Korea's defense ministry reiterated its refusal to send lethal arms to Ukraine, citing "our security situation" and the "potential impact on our military's readiness posture."

The assistance South Korea has provided has consisted of 1 billion won (US$804,100) worth of non-lethal military supplies, such as bulletproof helmets and blankets, and medical items.