SEOUL, Jan. 17 (Yonhap) -- Fans of such K-pop stars as rapper Psy, BigBang and 2NE1 will be able to see their idols whenever they want in hologram form.

The government, telecom giant KT and YG Entertainment jointly opened a hologram performance venue for K-pop stars on Friday in a shopping mall in the Dongdaemun Market area, one of the country's most popular tourist destinations. 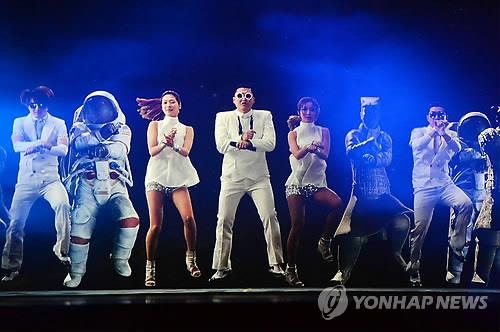 Located inside the Lotte Fitin shopping mall, the "Klive" theater has a hologram concert hall with a floor space of 1,650 square meters and various other digital attractions, according to a press release from the Ministry of Science, ICT and Future Planning.

Outside the concert hall are such digital attractions as an augmented reality (AR) elevator, which makes riders feel as though they are standing next to K-pop stars; a "secret window" that allows fans to watch not-yet-released videos of their favorite stars in 3D with special glasses; and a 6-meter-high "Giant Tower," where people can view photo albums of their favorite stars. There is also a "Star Photo Box" where visitors can pose for and print pictures with 3D images of pop stars.

The science ministry said it plans to support exporters of the hologram-related content to theme parks and large shopping malls in other Asian countries, including China and Japan.

KT says it is currently contacting potential foreign buyers to export the technology and is planning to build more of such facilities in the southern resort island of Jeju and Seoul's main shopping district of Myeongdong.

In August, S.M. Entertainment plans to open a similar performance venue at the COEX convention center in southern Seoul and develop a musical show combining an actual on-stage performance with holographic images.

"We need to develop killer content that can work in foreign countries for the growth of the domestic content industry," Yoon Jong-rok, vice science minister, said in the press release. "This project of combining digital technology with K-pop, which represents the global popularity of Korean pop culture, can be called a model case of making a creative economy."