People who get on the high-speed trains that serve the airport from provincial cities will no longer have to get off at Seoul or Yongsan stations to transfer to the Airport Railroad Express (AREX) or get on limousine airport buses.

"All they have to do is stay on their KTX that will take them directly to the airport," a KORAIL official said. This can greatly improve convenience for passengers.

The railroad operator said that its maximum speed will be restricted, because the KTX will be using the same railroad track as the slower AREX trains.

It said the KTX will take about an hour to reach the airport from Seoul or Yongsan stations, similar to conventional AREX trains. The company said test runs of the KTX on the route have been going on in earnest since late May.

The high-speed trains will augment the existing trains linking Seoul and the port city of Incheon, the country's main air transport hub.

KORAIL said the KTX will stop once at Geomam Station to pick up passengers from Incheon. 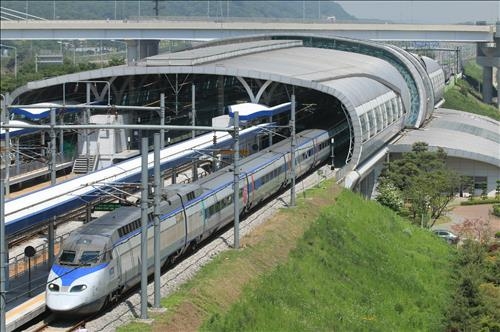