SEOUL, June 19 (Yonhap) -- North Korea's firing of ballistic missiles in March seems to have been aimed at testing if its midrange ones could target South Korea by skirting South Korean and U.S. interception systems, military sources here said Thursday.

On March 26, the communist North test-fired two midrange Rodong missiles from north of Pyongyang. Though the missiles have an estimated range of 1,000 kilometers to 1,500 km, those in March flew about 650 km before dropping into the East Sea.

Though Rodong-class missiles mostly target American bases in Japan, while parts of China and Russia are within their range, shooting them in the way that was adopted in March could cause them to hit South Korea.

"By carrying out such a test, North Korea appears to have come up with a way not to be caught by either the South Korean or American missile interception system when launching an attack against South Korea with its midrange missiles," he added. 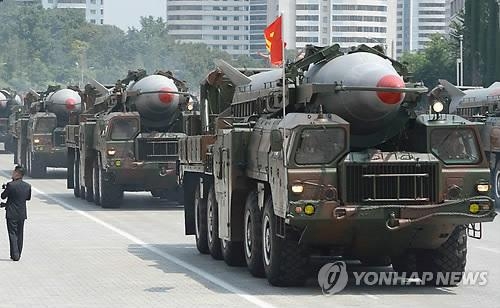 While declining to mention Pyongyang's intention behind the test, Seoul's defense ministry said the current missile defense system on Korean soil is not able to kill the North's Rodong-class weapons.

"At that time, the Rodong missiles flew at altitudes of more than 160 kilometers and with a top speed of over Mach 7.0. In that case, it is not easy for Patriot PAC-3 missiles to shoot them down," Seoul's defense ministry spokesman said at a regular briefing.

Both PAC-2 and PAC-3 missiles target Scud short-range missiles with a range of up to 500 kilometers. They also can intercept missiles at an altitude of under 40 kilometers.

Rodong missiles are considered to be more destructive as they can carry a nuclear warhead, but it is unknown whether Pyongyang has the capability to develop a small enough warhead to fit on them.

"That's why we have been developing our own long-range surface-to-air missiles (L-SAM) with our indigenous technology," the spokesman said, reaffirming the government's earlier stance that it will not buy the U.S. Terminal High-Altitude Area Defense (THAAD) battery.

THAAD, which can shoot down missiles at an altitude of up to 150 kilometers, is an integral part of the U.S.-led missile defense (MD), and South Korea has said it will not join the air defense system that Japan takes part in and aims to counter a rising China in the region.

Increasing pressure on South Korea to join its air defense system, however, the U.S. is considering deploying the THAAD battery in South Korea, citing evolving threats posed by North Korea.

"We will neither introduce nor plan to adopt the THAAD system in accordance with our own plan to develop the L-SAM system," he said.

As for the remarks by Defense Minister Kim Kwan-jin on Wednesday that South Korea does not oppose the deployment of the interceptor on Korean soil in accordance with the U.S. Forces Korea's own decision, the spokesman said even the THAAD deployment here does not mean that South Korea is joining the U.S. MD system.

"The primary goal (of the U.S.) in bringing the THAAD battery here is to protect its forces stationed here," Kim said. "Furthermore, it does not fit our military's Korea Air and Missile Defense system."