The release will come two months after the South Korean tech giant rolled out the industry's first bendable UHD TV in July. The 78-inch model features "UHD Dimming" technology as well as a "Black Crystal Panel" to provide viewers with a more vivid screen. 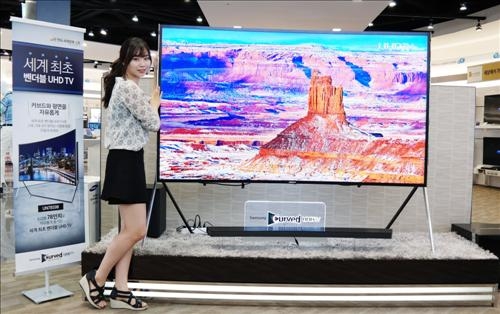 Bendable TVs refer to models in which users can manipulate angles to enjoy both flat and curved screens. This particular feature is said to give consumers the most suitable view because curved screens match the structure of the human eye.

"Samsung has been widening the gap with its rivals in terms of market share for curved UHD TVs, which have gained popularity in the global market since February," said Kim Hyun-suk, a display official from Samsung.

Samsung Electronics said it has garnered 43.3 percent of the global UHD TV market in the second quarter, far outpacing other rivals. It is aiming to solidify its dominance with the bendable lineup.

Last week, the company said it topped the world's market for UHD TVs for the 34th consecutive quarter in the April-June period, backed by robust sales in emerging markets.