INCHEON, Oct. 4 (Yonhap) -- As the 17th Incheon Asian Games came to an end on Saturday after a 15-day run, South Koreans felt the games were far more successful than any other previous quadrennial sporting event.

Unlike its bright World Cup outcomes, such as the amazing semifinals finish in 2002, South Korean football in the Asiad ground had been disappointing.

It had never reached the finals since its last gold at the 1986 Asiad in Seoul. It had reached the semifinals in every Asiad since then except for in 1998, when it had to return home after a stunning 1-0 defeat by Thailand in the quarterfinals at the games in Bangkok.

At this year's Asiad on home turf, South Korea fielded a full-strength team and lived up to the expectations of the home crowd, keeping clean sheets in seven games, including the finals.

As it was not easy to snap the 28-year-long gold medal drought, the final victory was dramatic.

Against North Korea, the home team could not get a decisive goal in the 120 minutes. Seconds before the whistle, when nearly all people expected a penalty shootout, Rim Chang-woo fired a last-gasp goal in a goalmouth scramble to bring home the long-awaited gold medal.

The South Korean men's basketball team staged a thrilling come-from-behind victory over Iran, the odds-on favorite in the competition, in Incheon.

South Korea erased a five-point deficit with two minutes to play to win its first gold in men's hoops since 2002, overcoming tough odds to beat the Middle East powerhouse.

The South Korean men's team joined the gold-medal quest in baseball, the most popular professional sport in South Korea, with a clean record of five straight wins.

The star-studded team defended its Asiad title after edging out Chinese Taipei 6-3 in the showery final.

Women's teams were also brilliant, as both basketball and volleyball squads beat China to claim their first Asiad golds in 20 years. 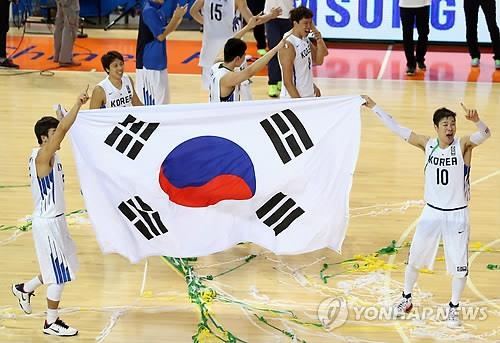 Volleyball players thrashed China 3-0, retaliating against the neighboring country for a 3-2 defeat in the Guangzhou final.

The women's hockey team also won the return match against China to top the podium, as China had vanquished South Korea on the final stage three times in a row starting in 2002.

Handball got revenge on Japan to reclaim the title it held eight years earlier. The women's team was upset by the Japanese in the semifinals in Guangzhou, ending its winning streak at five.

The men's handball team added a silver, and men's hockey and volleyball gained bronze each.

The dazzling gold rush, however, lacks some luster as some of the countries did not take the Incheon Games seriously.

There was an evident lack of parity in baseball, raising a heated debate about eliminating the sport from the Asian Games, as was the case with the Olympics.

People took the gold medal in baseball for granted. Japan and Chinese Taipei, which had been strong medal contenders in previous games, did not send their best players, who are playing in the U.S. Major Leagues or their domestic first-tier leagues.

Also, China and Japan did not send their first-string basketball and volleyball squads to Incheon to save their best for the world championships that are taking place before and after the Asiad.

South Korea, however, put all its efforts to win Asiad golds at home, virtually neglecting the world championships and coming up with the best squad only for gold in Incheon.

In football, Japan made up its squad with under 21-year-old players, instead of those under 23, in preparation for the Rio Olympics in 2016, while South Korea picked up three over-aged wild cards to set its eyes on the Asiad gold.

"China has a very deep squad in volleyball. Their B team is as strong as the A team," said Lee Sun-koo, head coach of the women's volleyball, refuting criticism that he won an easy gold medal in absence of the regional superpower.