BUSAN, Oct. 23 (Yonhap) -- The incoming head of the U.N.'s ICT agency said Thursday Internet censorship and freedom of speech online are matters of "interpretation" that do not come directly under the organization's areas of responsibility.

"Everybody supports this concept of freedom of speech. We will try to touch some kind of areas of this," Zhao Houlin, the new secretary-general of the International Telecommunications Union (ITU), told Yonhap News Agency in a brief interview. "But this is deeply related to the so-called context issues."

"The ITU is a special agency for technology and infrastructure. Freedom of speech is discussed on other platforms. We are not trying to take the issue to overlap (with other agencies)," he said. 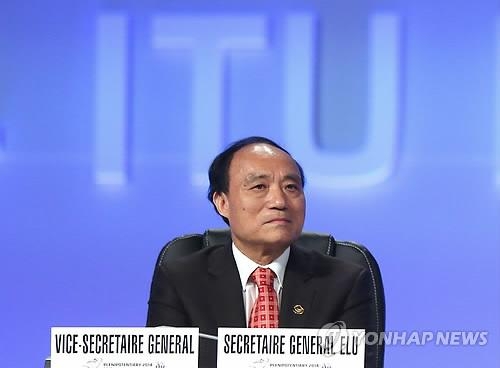 Zhao was elected Thursday as the head of the organization for the next four years. He is the first person from China to lead the agency that handles issues related to information and communications technology.

When asked about the Chinese government's censorship on the Internet, such as showing different results for sensitive keywords like the Tiananmen Square incident, Zhao replied, "Some kind of censorship may not be strange to other countries," adding this is also a matter of interpretation.

The 1989 Tiananmen Square protests, also known as the June Fourth Incident, called for democratic reform before being suppressed by the military.

He served two terms as the ITU's director of the Telecommunications Standardization Bureau from 1999 to 2006 and became the deputy secretary-general in 2007. He was re-elected in 2011.