SEOUL, Nov. 7 (Yonhap) -- The Samsung Lions rallied to defeat the Nexen Heroes 3-1 Friday to move ahead in the South Korean baseball championship series.

Park Han-yi hit a tie-breaking two-run home run with two outs in the top of the ninth inning, as the Lions claimed a 2-1 lead in the best-of-seven Korean Series on the road, at Mokdong Stadium in Seoul.

The Korea Baseball Organization (KBO) teams will be back at Mokdong for Game 4 at 2 p.m. on Saturday. 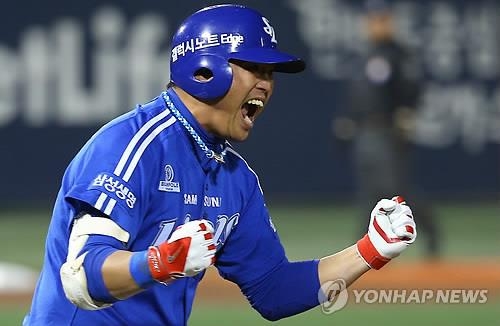 The Lions, chasing their fourth straight championship, will have history on their side. Out of the past 31 Korean Series, teams have been tied at one game apiece on 11 occasions. In those, the team that won Game 3 has won the championship 10 times.

With two soft-tossing lefties, Jang Won-sam for Samsung and Oh Jae-young for Nexen, locked in an unlikely pitchers' duel, neither team generated much offense early.

The Lions left the bases loaded with two outs in the top of the first. Oh got two quick outs before two walks and a double loaded the bases for Lee Seung-yuop. The veteran slugger, though, hit a fly to center for the inning's final out.

The Lions threatened again in the top of the fourth, putting men at the corners with two outs on a walk, a single and an error. The rally again ended on a fly to center, this time by No. 9 hitter Kim Sang-su.

The Heroes were even more futile. They only got their first hit off Jang with one out in the fourth. They had men at first and second with two outs later in the same inning but Kim Min-sung struck out looking, as Jang escaped the inning unscathed.

In the fifth, Vinny Rottino finally put the Heroes on the board, jumping on a 2-1 hanging slider to give the scoreless game a jolt.

The Lions had men at second and third with two outs in the sixth against reliever Cho Sang-woo, who managed to retire Jin Kab-yong on a line drive to second.

The Heroes missed a chance to pad their lead in the bottom of the seventh, when pinch runner Yoo Jae-shin got caught in a rundown between first and second after a quick pickoff throw.

The botched steal attempt haunted the Heroes in the eighth. Facing reliever Son Seung-lak, Choi Hyoung-woo hit a one-out single and fleet-footed Park Hae-min, who had 36 steals in the regular season, pinch ran for him.

After Park Sok-min went down swinging for the second out, Lee Seung-yuop hit a towering fly to shallow center, and Park Hae-min took off from first on contact. Center fielder Lee Taek-keun, who was playing deep with the slugger at the plate, and second baseman Seo Geon-chang gave it a good chase before it fell out of the diving Lee's reach.

By the time the ball hit the ground, Park had already made the turn at third and was on his way home for the tying run without a throw.

Son settled down and struck out the first two batters in the ninth. The Heroes then went to the bullpen, with the sidearmer Han Hyun-hee coming in to face Yamaico Navarro.

Han walked Navarro on five pitches. Park, who was the 2013 Korean Series MVP, battled Han to a full count before drilling a fastball over the center field wall for a 3-1 lead, further cementing his legacy as one of the KBO's greatest playoff performers.

Park entered the game as the all-time leader in the Korean Series in hits, RBIs, runs scored and total bases.

Reliever An Ji-man earned the victory for Samsung with 1 2/3 scoreless innings, and closer Lim Chang-yong retired the side in the ninth for the save.

Han Hyun-hee took the loss after serving up the fatal home run in the ninth.

Park Hae-min, who began Friday on the bench after injuring his finger on a slide in Game 2, made a fine diving catch on a sinking liner off the bat of Lee Taek-keun in the bottom of the ninth.

The Heroes' bullpen wasted a fine start by Oh Jae-young, who made his first Korean Series appearance since 2004. Oh tossed five scoreless innings and gave up just two hits. He was unable to find the strike zone early but worked his way around three walks in a no-decision.

Samsung starter Jang Won-sam was also effective in his 6 1/3 innings, holding the Heroes to a run while striking out six. He received no support from the usually reliable offense but Lee Seung-yuop's lucky single in the eighth got him off the hook.

The Heroes' two vaunted sluggers, Park Byung-ho and Kang Jung-ho, were a combined 0-for-7 with three strikeouts. They hit 92 homers combined in the regular season but have just one so far in the Korean Series.

The Heroes will try to even the series Saturday with their ace, Andy Van Hekken, on the mound. The 20-game winner will pitch on three days' rest, after holding the Lions to two runs in six strong innings in Game 1 on Tuesday.

The Lions will look to take a commanding 3-1 series lead, as J.D. Martin takes the ball. This will be the right-hander's first Korean Series start. He struggled mightily against the Heroes in the regular season. In 6 2/3 innings spanning three appearances, Martin was tagged for 18 earned runs for a 24.30 ERA. He also served up five homers against Nexen.