(ATTN: UPDATES with KBO's move in para 8)
By Yoo Jee-ho

Yonhap News Agency learned earlier in the day that the San Diego Padres had won the bidding war for the pitcher in a silent auction among Major League Baseball (MLB) clubs, after the Wyverns posted him for interested big league teams earlier this month.

With the Wyverns' decision, the Padres have 30 days in which to negotiate a contract with the 26-year-old pitcher.

The Wyverns were first informed of the result of the bidding on Tuesday. They were said to be so disappointed with the amount of the winning bid that team officials said they would take their time before deciding whether to accept the bid.

Kim thanked the Wyverns for giving him the opportunity.

"Now that I've been given a chance to try to reach the majors, which has been my lifelong dream, I'll try to make the best of the situation and prove myself on the biggest stage," Kim said through the team. "I will go back to the drawing board and prepare the best I can."

Later on Wednesday, the Korea Baseball Organization (KBO) said it has informed MLB of the Wyverns' decision to accept the bid. If Kim and the MLB club can't come to an agreement, Kim will have to remain with the Wyverns and won't be eligible for posting until Nov. 1, 2015.

The KBO had earlier asked the Wyverns to make their decision by 6 p.m. Friday, so that it can inform MLB of that decision by 7 a.m. Saturday, Korean time. 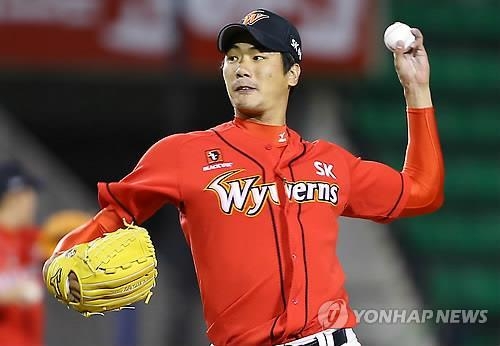 In a press release, the Wyverns said they decided to support Kim's dream and that they will be fully behind their pitcher until Kim realizes his goal.

Kim completed the equivalent of seven full seasons in 2014 to earn conditional free agency, a status that allows KBO players to test overseas markets with their team's approval.

Before the start of the 2014 season, Kim had said he'd like to be posted for MLB clubs this winter. The Wyverns granted Kim his wish and announced at a press conference last month that they would post Kim.

The Wyverns also said they would accept a bid from an MLB team only if they feel the money is right, without specifying how much they were looking for.

Kim is trying to become the second KBO player to reach the majors via posting after Ryu Hyun-jin, the left-handed starter for the Los Angeles Dodgers who made the jump in 2012.

The Dodgers bid more than $25.7 million to negotiate with Ryu. The bid for Kim is the second-highest amount submitted for a South Korean player.

Kim, a former KBO MVP, went 13-9 with a 3.42 ERA in 28 starts in 2014, bouncing back after struggling with injuries in recent years. He ranked among the top five in the Triple Crown categories of wins, ERA and strikeouts, and was one of only six starters to post an ERA under 4.00 in a year of massive offensive numbers.

Kim recently claimed he feels perfectly healthy and doctors have told him that he could pitch even more innings next year than the 173 2/3 he logged in 2014.

Kim is mostly a two-pitch starter whose fastball sits around 150 kilometers per hour (93 miles per hour). He can throw a sharp slider that can break vertically or horizontally. Kim has said he wanted to learn how to throw a better changeup if he reaches the majors.

Questions remain as to whether Kim can contribute immediately at the big league level. Some scouts have said he's ready for the majors, but others have disagreed, saying he'd be better off honing his skills further in the minors and that he may be better suited as a relief pitcher in the big leagues.

In 2009, right-hander Choi Hyang-nam was posted and the St. Louis Cardinals bid $101 for him. Choi's KBO club, the Lotte Giants, accepted it, but Choi signed a minor league deal and never reached the majors.

Before Choi, three other KBO players had been posted. Left-hander Lee Sang-hoon of the LG Twins commanded US$600,000 in the bidding in 1998 but the Twins rejected the offer. Lee later went to Japan and joined the majors as a free agent.

Pitchers Jin Pil-jung, formerly of the Doosan Bears, and Lim Chang-yong, then with the Samsung Lions, drew $25,000 and $650,000, respectively, in December 2002, and their KBO clubs both turned down the bids.

Lim eventually signed a deal with the Chicago Cubs and had a brief stint there last year, but returned to the Lions before the start of the 2014 season.