SEOUL, Nov. 18 (Yonhap) -- Hyundai Asan Corp., the company that pioneered inter-Korean commercial ties, said Tuesday that its loss from the suspension of its North Korea tour programs is estimated at nearly 1 trillion won (US$909 million) over the past six years.

The company said on the eve of the 16th anniversary of starting the tours to Mount Kumgang on North Korea's east coast that it has also been forced to reduce its workforce by up to 73 percent.

Before visits were stopped, the company employed 1,084 people to handle tours to Mount Kumgang and the city of Kaesong, but the staff has been slashed to just 285. Kaesong was the capital of the Goryeo Dynasty (918-1392).

Seoul banned all tourists from visiting the isolated country after a North Korean guard shot a South Korean visitor dead in July 2008 at Mount Kumgang. South Korea said the North must formally apologize for the mishap and assure that the tragedy will not occur in the future.

Tourists first started visiting the mountains in November 1998 and by 2008, over 1.93 million made the trip to the North.

The halt in tourism is particularly painful because the company, part of the larger Hyundai Group, invested 226.8 billion won in various facility investments and US$486.69 million to acquire land and operational rights from Pyongyang.

Hyundai Asan said that despite troubles, it has a plan in place that can restart tours in two months, with its top executives still hoping that cross-border relations will improve so operations can resume. 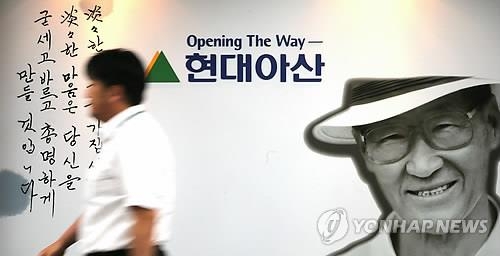