SEOUL, Sept. 1 (Yonhap) -- A bronze statue of a girl has remained steadfast in front of the Japanese Embassy in Seoul for the past five years as a witness to constant calls for a sincere apology by Tokyo over the sexual enslavement of women during its occupation of the country in the first part of the 20th century.

In an interview with Yonhap News Agency, the sculptor of the statue said it should remain where it is in order to remind people of Japan's past wrongdoings and prevent a repetition of the tragedy.

This year, the life-size sculpture symbolizing the victims, euphemistically called comfort women, marks the fifth anniversary of it being placed across the street from the site of the Japanese Embassy building in central Seoul.

The piece has recently found itself getting more spotlight after South Korea and Japan reached an agreement to resolve the long-running diplomatic row over the sexual enslavement of Korean women by imperialist Japanese troops during the colonial period (1910-45).

"The initial idea was to set up a tombstone with epitaphs, but it seemed too uninspiring, then we came up with ideas of a pair of rubber shoes or an empty chair," Kim Seo-kyung, the girl statue's sculptor, told Yonhap on Wednesday. Her husband Kim Eun-sung is a co-producer of the sculpture.

She was referring to 2011, when the Korean Council for the Women Drafted for Military Sexual Slavery by Japan, the key advocacy group for the comfort women issue, was planning to mark the approaching 1,000th weekly demonstration over the crime against humanity on Dec. 14. The rally held every Wednesday in front of the embassy since 1992 had its 1,246th session this week.

"We eventually came up with the idea of a girl's shape as we tried to find the best way to shed light on the pains suffered by the sexual slaves who have long since become old women," Kim said. "They are now all old, but they were young girls when they were forced into a life of servitude." 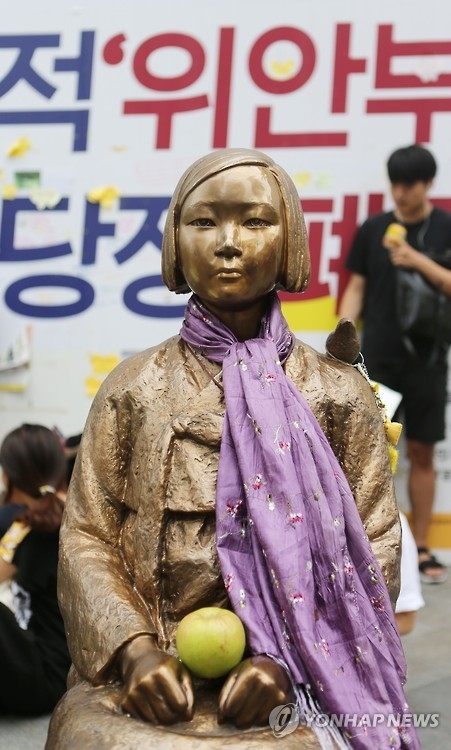 Historians estimate that up to 200,000 women, mostly young Korean women, were forced to work in front-line brothels for Japanese troops during World War II.

But the sexual slavery remained unknown for nearly half a century after Korea regained its independence from the Japanese, only coming to light when the first victim came out to testify in 1991.

Since then, a total of 245 victims have been officially registered although only 40 of them are currently alive.

Following up on a landmark South Korea-Japan agreement reached last year to put an end to the historical feud, Japan paid 1 billion yen (US$9.69 million) on Wednesday to a South Korean foundation aimed at helping the victims and restoring their honor.

With the transfer of the funds, Japan has also increased its calls to remove the statue of the girl who is staring right into the embassy building site with clenched hands.

"It's a preposterous demand. No country has ever asked another country to remove a sculpture on their soil because of discomfort especially when the asking side is the offender and the other is a victim," Kim said.

"Japan wants to whitewash its wrongdoings one by one, but our role is to bring them out and shed light on them," she said. "Only through these acts can the offender be constantly reminded of its misdeeds and a repetition of them could be prevented."

"I find so much meaning in the girl sculpture playing a role, albeit a small one, in making such changes," the artist noted. 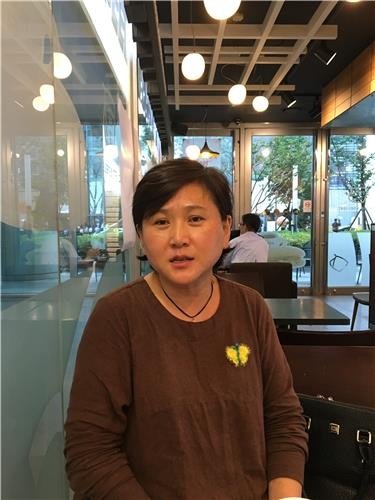 Japan is not the sole object of the girl's cry for changes, but she's also reaching out to others to warn that conflict should never break out again, Kim said on the background of the design.

"I put special attention to making the girl dignified in appearance... rather than using anger, sadness or weakness," the sculptor said. "It's an expression of the determination that they will not give up until they have an apology."

The comfort women issue is only one of many historical subject matters Kim's works deal with. Terror of war and Japan's colonial-era labor enforcement are some of the subjects she has recently worked on.

So far, 44 girl statues by Kim have been erected, including one each in the United States, Canada and two other countries.

"No art piece, even those not made commercially or politically, can be apolitical. Power and money are always in play," she said, suggesting her philosophy in art is an expression of political participation. "We've put the focus on actively making our voices heard."