SEOUL, Sept. 2 (Yonhap) -- South Korea's National Assembly passed the much-awaited extra budget plan on Friday, after ruling and opposition parties finally narrowed their differences on where the money will be spent.

The ruling Saenuri Party and the main opposition Minjoo Party of Korea argued for weeks over the 11 trillion won (US$9.82 billion) bill's usage and what endeavors it should support, until they reached a breakthrough compromise after marathon negotiations at late Wednesday night.

The passage comes 38 days since the government first proposed the bill on July 26.

Among the 217 lawmakers who participated the session, 210 voted in favor of the budget plan. The government plans to allocate the fund before Chuseok, the South Korean equivalent of Thanksgiving, which occurs later this month. 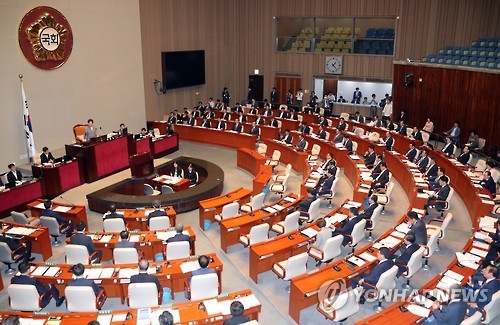 Parties agreed to reduce government-led investment, but instead allocate more money on education, healthcare, as well as creating jobs.

Saenuri has been claiming that the budget should put top priority on revitalizing the national economy and creating more jobs, while Minjoo insisted that the budget needs to be allocated to education programs.

The main opposition party also had suggested the budget should include subsidies for South Korean firms based in the Kaesong Industrial Complex, a North Korean industrial zone which was shut down earlier this year.

In the belated conclusion, the parties agreed to allocate 200 billion won on improving education facilities, while excluding subsidies for Kaesong-based firms.

South Korea's presidential office has been urging parliament to speed up the negotiations, adding that the budget needs to be implemented in a timely manner to effectively lend support to the economy.

The final passage of the plan was further delayed as the ruling Saenuri Party protested against National Assembly Speaker Chung Sye-kyun, citing his lack of effort to maintain political neutrality.

Amid the controversy, the parliamentary session was chaired by vice speaker Park Joo-sun of the minor People's Party instead of Chung.

The budget plan received an approval from the Cabinet in an extraordinary session presided over by Prime Minister Hwang Kyo-ahn later in the day.

The government said the meeting follows Seoul's efforts to promptly allocate the budget to quickly revitalize the national economy.

"The focus of the budget plan is on supporting corporate restructuring and job creation to cope with the uncertainty of external economic conditions and the shrinking employment," Hwang told the Cabinet members during the meeting. "The supplementary budget, if enforced, will greatly contribute to stabilizing the livelihood of the economically less privileged people and revitalizing the regional economy," he said.