SEOUL, Sept. 1 (Yonhap) -- The elder son of Lotte Group founder Shin Kyuk-ho was summoned by prosecutors Thursday as they resumed an investigation into the embattled retail giant after one of its senior executives was found dead in an apparent suicide last week.

Shin Dong-joo appeared before the Seoul Central District Prosecutors' Office as a suspect on charges of embezzling some 40 billion won from the group's major affiliates.

Prosecutors suspect he received the money as a stipend by just being listed as a board member of the companies between 2006 and 2015.

Entering the prosecutors' office, he declined to comment on any of the allegations raised.

During the questioning, Shin is known to have partly admitted to receiving the money, while claiming that he only realized in hindsight that the money was being given to him. 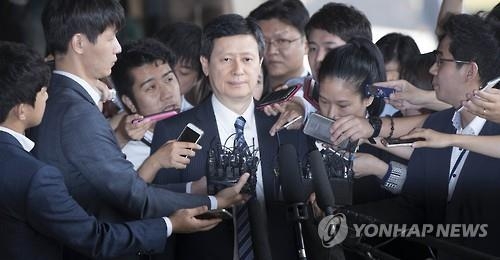 He is the second member of the owner family to be summoned after Shin Young-ja, his elder sister.

She was detained and indicted in July over suspicions that she pocketed some 3.5 billion won (US$3.1 million) in kickbacks from local companies, in return for business favors related to Lotte's duty-free and department stores.

Prosecutors also summoned her on Wednesday to verify separate allegations that the group's founder dodged some hundreds of billions of won in taxes in the process of donating a combined 6.2-percent stake in Lotte Holdings, held in borrowed names, to his third wife, her daughter and Young-ja in 2006. Lotte Holdings is Lotte's de facto holding firm based in Tokyo.

Lotte, which has sprawling businesses in both South Korea and Japan, has been gripped by a series of scandals since last year, including a bitter feud between Shin Dong-bin, the incumbent Lotte chairman, and his older brother for managerial control.

Dong-joo has consistently claimed the Lotte Group founder handpicked him as the successor, but Dong-bin insisted that his father was unable to make reasonable judgments due to mental health problems. The prolonged family feud virtually came to an end after the founder's second son and incumbent chief won shareholder support in March to tighten his grip on the group.

On Wednesday, a Seoul court designated a nonprofit subsidiary of a local firm as legal guardian of the founder, saying he lacks the ability to make business decisions due to illness and old age.