SEOUL, Sept. 1 (Yonhap) -- Prosecutors on Thursday filed for a court-issued arrest warrant for an incumbent judge after grilling him over allegations he received kickbacks from a local businessman who is at the center of a lobbying scandal that is rocking the country's legal sector.

Earlier on Wednesday, the Seoul Central District Prosecutors' Office called in the judge, identified only by his surname Kim, to ask questions about suspicions he received bribes from Jung Woon-ho, former chief of local cosmetics brand Nature Republic.

After questioning Kim for over 17 hours, prosecutors took him into custody, citing his unstable mental state. A Seoul court will hold a hearing on Kim on Friday before deciding whether to issue the warrant.

Kim asked for a leave of absence earlier this month after the allegations came to light. The country's top court allowed it till February.

A number of former and current legal professionals and businessmen are standing trial in relation to the sprawling scandal. 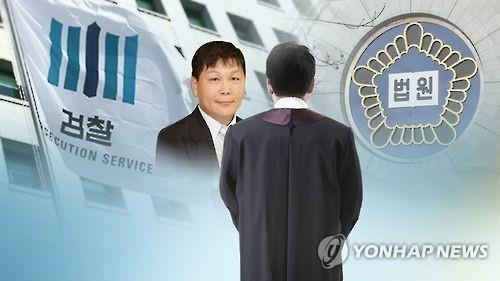