Lee Chung-yong and Koo Ja-cheol, with a little help from China’s Zheng Zhi, gave South Korea its first win in the final Asian qualifying round for the 2018 FIFA World Cup. China got two goals from Yu Hai and Hao Junmin at Seoul World Cup Stadium, but it wasn't enough to hold down the hosts.

For the final regional qualification, South Korea and China are in Group A along with Iran, Uzbekistan, Qatar and Syria.

A total of 12 Asian Football Confederation (AFC) members are divided into two groups of six teams to play home-and-away round-robin matches in the last phase of World Cup qualifying. The top two teams of each group will qualify for the World Cup, and the two third-placed teams will have to go through play-off rounds to book a spot.

South Korea, looking for their ninth consecutive World Cup appearance, will face Syria next on Tuesday in Malaysia. Syria can't stage matches at home due to the ongoing civil war.

Playing in front of 51,238 fans at Seoul World Cup Stadium, where Chinese supporters made up almost half, South Korea pushed forward from the start, with their first shot taken by Son in the seventh minute.

South Korea went on the board first in the 21st, thanks to Chinese veteran Zheng. After Oh was brought down by Zhang Linpeng just outside of the box, Son's free kick was headed down by Ji and then went off the leg of Zheng into the net.

Son and Ji almost teamed up for the hosts just three minutes later, also from the set piece, but this time Ji's header went wide and he was ruled offside.

China tried to level the score with Wu's efforts in the 29th and in the 39th, but both failed to find the net. Wu, the all-time leading scorer of his club Shanghai SIPG, also got the chance for an equalizer in the 41st after intercepting Jang's stray pass, but the uncontested attacker failed to convert.

In the second half, South Korea quashed China's counterattacks with two goals in a three-minute span. Lee doubled the lead in the 63th when he headed down Ji's left-footed cross and beat Chinese goalkeeper Zen Cheng. Koo Jae-cheol then redirected Son's cross from the left side to make 3-0.

China, however, didn't give up as they cut down the three-goal deficit to one, also in a three-minute span.

Holding on to a slim lead, South Korea replaced Koo with 20-year-old Hwang Hee-chan in the 79th and energetic midfielder Lee Jae-sung came on for Lee Chung-yong four minutes later. China made their final substitution in the 78th as Gao Lin came on for Sun Ke.

South Korea tried to give themselves more breathing room, though Son and Lee Jae-sung were both denied by Zeng in the late moments.

The hosts managed to stay in front through four minutes of added time. 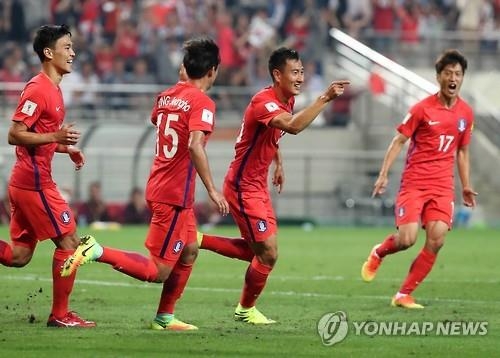