SEOUL, Sept. 1 (Yonhap) -- South Korea head coach Uli Stielike said Thursday he doesn't think his side's 3-2 victory over China in the World Cup qualifier was a bad result, since the players learned from their mistakes in nearly blowing a big lead.

South Korea, ranked No. 48, collected a nail-biting victory over No. 78 China to open their final Asian qualifying round for the 2018 FIFA World Cup. The hosts squandered a three-goal lead to settle for a one-goal margin at Seoul World Cup Stadium.

South Korea had 17 wins, 12 draws and one loss against China before Thursday, and many local fans expected that the Taeguk Warriors would get an easy win. Stielike, however, said it wasn't the case.

"It wasn't an easy match," he said at the post-match press conference. "We really struggled to get a victory."

However, Stielike said the match taught his players a good lesson.

"Our players should have learned that they have to play well for 90 minutes, not only 70 minutes," he said. "We learned what we need to improve."

Stielike added that the result will also lift pressure on South Korea to keep their clean sheet streak alive. Prior to this match, South Korea hadn't conceded a goal in eight World Cup qualifying matches.

"Now we can get rid of the pressure of keeping the clean sheet record and just go for victories," he said.

The German coach said South Korea played quite well in the first half as they took control of ball possession. But he lamented that the second half was lopsided as Chinese struck back with two goals after going down 3-0.

"I think 1-0 was a fair result after the first half," he said. "We gave up the first goal due to our mistake, and the second goal was from a free kick, which I can accept. We could have finished the match easily, but we wrapped up in a hard way."

Stielike said his players got too loose after they earned a three-goal lead. He also pointed out some players were not fit to play.

South Korea will next face Syria in Malaysia on next Tuesday. The coach confirmed that Tottenham Hotspur attacker Son Heung-min will not travel with the team and instead return to his English Premier League club. For his replacement, Stielike said he will pick Seongnam FC striker Hwang Ui-jo.

"Son was recently in transfer rumors and he was actually having talks with clubs," he said. "After his transfer talks fell through, Son wanted to play for our next match, but he will return to Tottenham."

Chinese coach Gao Hongbo said he is satisfied with the players' performance throughout 90 minutes. He claimed South Korea's abundant experience in this stage helped them.

"South Korea netted three goals in four scoring chances, and I don't know whether this is a result of their luck or work," he said. "I'm not happy that we scored just two goals considering chances we created, but I want people to understand our lack of experience."

Gao, however, said the match against South Korea will help them to play better against Iran, the top-seeded opponents whom they will host next Tuesday in Shenyang.

"It gives us a lot of confidence that we cut the three-goal deficit to one," he said. "We are in the top stage of the Asian football for the first time in10 years, and I think our players need some time to adapt." 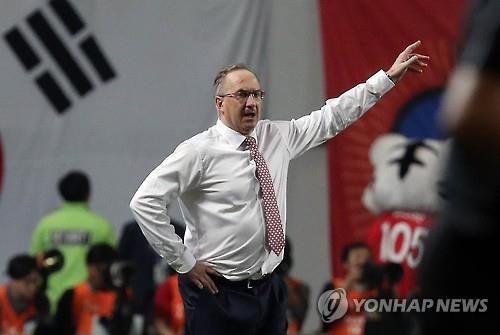