SEOUL, Sept. 1 (Yonhap) -- For those who visited Seoul World Cup Stadium on Thursday, it would have been difficult to tell whether this was home for South Korea or China.

That's because the nation's largest football-only stadium, where South Korea and China were scheduled to start their final Asian qualifying round for the 2018 FIFA World Cup at 8 p.m., was packed with Chinese supporters, chanting "Jiayou," meaning "Go for it," or "Cheer up," in Chinese.

Both South Korea and China use red as their main team color. But since South Korean players will wear red jerseys and Chinese footballers will wear their yellow kit on the pitch, it will be easy to tell friend from foe. Some Chinese fans showed up with red shirts, but still yellow was the dominant color at least in the south stands of the stadium.

"I just came here to support my national team," said Hu Lingna, who came from Xian with her friends. "Of course, I expect my team to win. I'm Chinese." 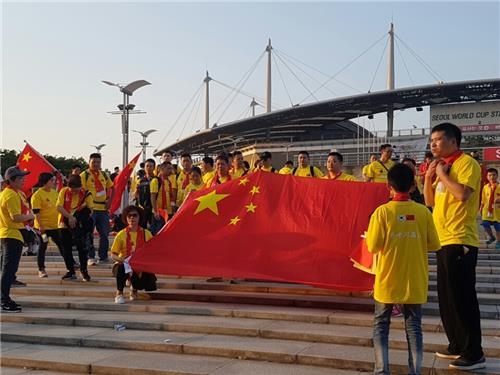 The Korea Football Association (KFA) said that Thursday's World Cup qualifier will likely set a new record for the number of foreign supporters visiting South Korea for a single football match. An estimated 30,000 Chinese fans are expected to visit the 66,000-seat stadium. The previous mark was set in November 1997, when some 10,000 Japanese fans showed up at Jamsil Olympic Main Stadium in Seoul to watch the 1998 FIFA World Cup qualifier against South Korea.

For this World Cup qualifying opener, the Chinese Football Association had originally demanded its South Korean counterpart allocate a maximum 50,000 tickets for its football fans. The KFA later decided to give it 15,000 seats, but there could easily be more visiting supporters because of Chinese residents in South Korea and those who purchased their tickets through travel agencies.

The KFA said some 250 Chinese reporters and media officials will also watch the match at the stadium.

The Chinese supporters showed up at the south stands of the stadium two hours before kickoff, working on their moves with a giant national flag during the anthem and practicing their cheers. In contrast, there were still plenty of empty seats in the north stands for the South Korean fans.

To counter the Chinese fans, the KFA handed out 20,000 free red shirts to South Korean supporters before the match. It also held various promotional events to pull in home fans to the stadium, so that the Taeguk Warriors can feel they are actually at home.

However, the Chinese supporters raised their voices from the get-go, waving national flags and chanting.

The Chinese fans know it's not going to be easy to beat South Korea as visitors. But they said they are here to enjoy football.

"South Korea are strong and I don't expect we will get a good result against them," said Chen Hao, who came from Beijing. "But I want to see our players show their best performance." 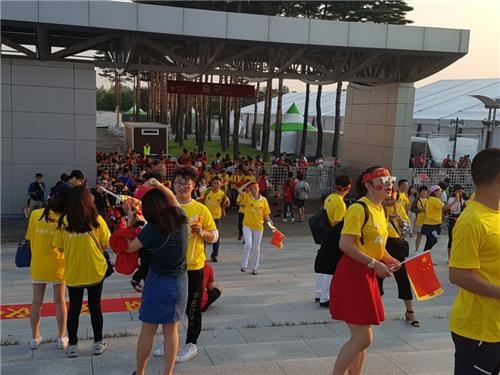 Football insiders said the large number of Chinese supporters is in line with the country's big investment in football. Driven by leader Xi Jinping, China in recent years has made lavish investments to hire high-profile foreign coaches and players in its pro league. This apparently brought back local fans' attention to football, which was once marred by match-fixing scandals.

With development in the Chinese Super League, it has been reported that China wants to be a global football leader by 2050 and also aims to make its national team capable of winning the World Cup. According to state-run Global Times, China plans to have more than 70,000 football fields by the end of 2020 and hopes the sport will be played by more than 50 million people.

For some Chinese fans, coming to South Korea brings nostalgia of their first and only World Cup experience. In 2002, China qualified for the World Cup after South Korea and Japan were automatically given spots as co-hosts and didn't enter the qualifying round.

"I want us to play in the World Cup again," said Chinese football fan Wang Lin. "I believe we can do it."

"I'm going to be in South Korea for three days, and I already visited Myeong-dong and 63 Building," Chen from Beijing said. "I want to enjoy football and go to many (popular) places here."