SEOUL, Sept. 1 (Yonhap) -- President Park Geun-hye will hold summits with the leaders of the United States, China and Russia, among others, during her eight-day overseas trip that will begin later this week, her office Cheong Wa Dae said Thursday.

On Friday, Park will embark on a trip to Russia, China and Laos to attend a series of multilateral and bilateral summits where she is expected to seek stronger international unity against North Korea's evolving nuclear and missile programs.

Park will sit down with her Chinese counterpart Xi Jinping on the sidelines of a summit of the Group of 20 (G20) advanced and emerging economies, which is slated to take place in Hangzhou from Sunday through Monday. 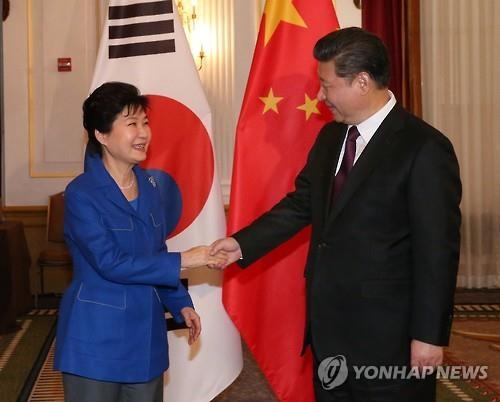 In Hangzhou, Park is also set to meet with the leaders of Saudi Arabia, Egypt and Italy, her office said.

Park's summit with Xi will follow a one-on-one meeting with Russian President Vladimir Putin, which is slated to occur on the margins of the Eastern Economic Forum to be held from Friday to Saturday in Russia's far eastern city of Vladivostok.

During her three-nation tour, Park will also hold a summit with U.S. President Barack Obama. Their summit is to be held during the 10-member Association of Southeast Asian Nations (ASEAN) leaders meeting in the Laotian capital of Vientiane next week.

During Park's stay in Vientiane from Tuesday to Friday, Park is to attend the South Korea-ASEAN summit and the ASEAN-plus-three summit, which involves South Korea, China and Japan, and the East Asia Summit (EAS).

Seoul and Tokyo are also in talks to arrange a summit between Park and Japanese Prime Minister Shinzo Abe during the ASEAN-related talks, Cheong Wa Dae said.

During the separate summits with Xi and Putin, Park is expected to reiterate that the recent decision by Seoul and Washington to deploy an advanced U.S. anti-missile system to South Korea is an inevitable, self-defense measure to counter Pyongyang's growing military threats.

Beijing and Moscow have vehemently opposed the deployment, arguing that it would only aggravate regional military tensions and undermine their security interests.