SEOUL, Sept. 1 (Yonhap) -- An 18th-century stolen Korean Buddhist painting will be returned from the United States in the first half of next year as its American owner and a U.S. art museum now holding it have agreed to do so, cultural heritage authorities here said Thursday.

The painting, called "Obuldo" in Korean, a depiction of Five Buddhas, was stolen from Songgwangsa Temple in Suncheon, 415 kilometers southwest of Seoul, sometime in the early 1970s. “Obuldo” was made as one painting in a series of 53 Buddhas in 1725. 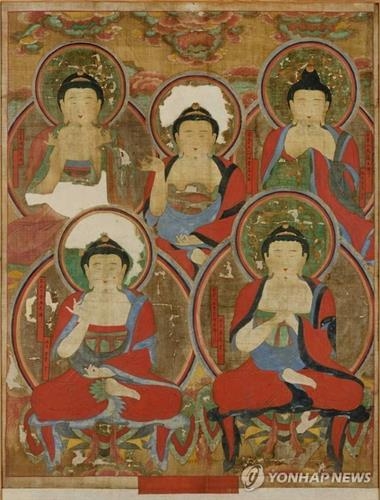 American Robert Mattielli, who lived as an artist and teacher in Seoul for three decades from the 1960s, visited an antique shop in Insa-dong, called "Mary's Alley," one day in the early 1970s, and bought the roughly folded Buddhist painting for just US$10, although it had large areas of loss at that time. He then took the damaged painting to a famous Korean restorer who flattened, cleaned and framed it.

Mattielli and his wife Sandra moved back to Oregon in 1985 with the artwork.

The two, advocates for Korean art, decided to donate the work to the Portland Art Museum in 2014, when a team from the Korean National Research Institute for Cultural Heritage was conducting a survey of the U.S. museum's Korean collections to publish a bilingual catalogue, according to the Korean Cultural Heritage Administration (KCHA).

Several months later, the team reported to the museum that the Buddhist painting was stolen from Songgwangsa sometime in the early 1970s.

Upon hearing the news, the couple offered to repatriate the painting to South Korea, and later the museum and the KCHA agreed on its return after a special exhibition and symposium in the latter half of this year.

The exhibition will run from Sept. 3-Dec. 4, and renowned scholars Robert Buswell of UCLA and Maya Stiller of the University of Kansas are to deliver their lectures on "Songgwansa and its Significance in the Korean Buddhist Tradition" and "Repentance for the Living and the Dead: The Avatamsaka Compound and Songgwansa" at the symposium set for Dec. 3, the KCHA said. The KCHA also is sponsoring the events.

"The ‘Obuldo’ might have disappeared forever if there were not Mattielli who bought and framed the severely damaged work," a KCHA official said

"We'll invite the Mattiellis to the painting's enshrinement ceremony set for next year in order to officially convey our thanks to them," he added.
(END)

Stolen Buddhist painting to be returned from U.S.

Stolen Buddhist painting to be returned from U.S.