The Ministry of Science, ICT, and Future Planning said next year's budget for various science and technology projects, subject to parliamentary endorsement later this year, is set to increase to 15.3 trillion won (US$13.6 billion). 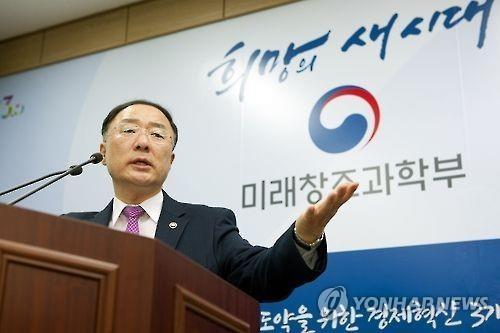 The Seoul government has been pushing forward with various projects to secure a new growth strategy to cope with the fast-paced industrial transformation, dubbed the "fourth industrial revolution" characterized by a fusion of cutting-edge technologies, such as big data and the Internet of Things (IoT).

The goal of the projects are to boost the local economy by turning innovative ideas into businesses through science and technology, while generating business opportunities by converging different industries, officials said.

By sector, the government said it will first allocate 30 million won each to up-and-coming researchers who pose high potential.

Another 4.7 trillion won, a 5.7-percent increase from a year earlier, will be used to expand R&D, including fostering manpower in the basic science sector, the ministry said.

Also, the budget allocated for creative economy innovation centers will increase by 8.5 percent on-year to 607.2 billion won in 2017.

In cooperation with provincial governments, the government has established 17 centers across the country to provide various kinds of support for aspiring entrepreneurs.

The centers are part of President Park Geun-hye's centerpiece policy, "creative economy," that seeks new and inventive business opportunities and more jobs through the fusion of information technology and other industries.

Also, the budget to strengthen infrastructure in the cultural-content industry will be 1.74 trillion won, an 8.1-percent increase from a year earlier, officials said.

The allocated budget will be used to build K-Culture Valley, a cluster of film and drama studios, with a K-pop arena and hallyu theme park that is set to open in 2017.

A total of 1.34 trillion won will be used in strategic projects such as unmanned vehicles, light materials, the smart city model, AI and virtual reality (VR).

Noticeably, the government designated that the AI sector will raise the country's competitiveness amid growing calls that South Korea should revamp its R&D strategy to catch up with other global powerhouses in the field.

The 2017 budget in bio-industry will be increase 10 percent on-year to 521.5 billion won, officials said.

South Korea's combined budget for R&D will reach 19.43 trillion won in 2016, with the ICT ministry taking up around 6.8 trillion won.