DHARAMSHALA, India, Sept. 1 (Yonhap) -- The Dalai Lama called for love, mercy and sympathy for a better future at a meeting with a South Korean Buddhist group advocating for his visit to the country.

"I have not been able to visit Asian countries except Japan," the 81-year-old Tibetan spiritual leader told about 10 representatives from the group and the accompanying Korean journalists at his residence in Dharamshala, northwestern India, on Tuesday. "I am certain about my future visit to South Korea, if the South Korean believers' religious minds stay clean and faithful to religious oath." 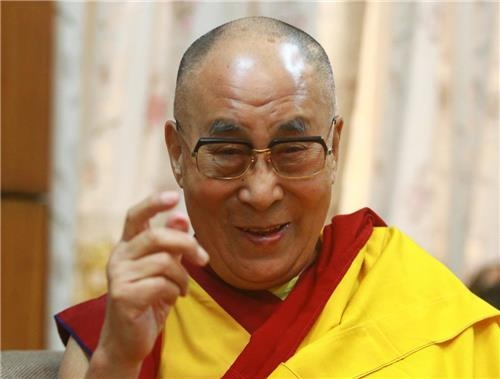 On a global level, the Dalai Lama's spiritual teachings remain a source of moral inspiration to the public. He was presented the Nobel Peace Prize in 1989 for his nonviolent Tibetan liberation movement, on the basis of the Buddhist arch-principle of mercy. Despite being a world spiritual leader, however, he has been unofficially barred from visiting many Asian countries with Buddhist historical heritage.

The South Korean government has refused Buddhist circles' repeated attempts, including those in 2002 and 2007, to allow the Nobel Peace Prize laureate to visit the country, out of concerns that it could deteriorate diplomatic ties with Beijing.

"The Chinese government seems to be setting plans with the bigger picture in mind," he said, hinting at a change in Chinese policy on religion.

During the meeting, the Dalai Lama repeatedly emphasized that he is entirely out of Tibetan political matters.

"I completely took my hands off the 400-year (Tibetan traditional) divine rule," he claimed. "There is not a bit of deception in my words."

In 2011, the religious guru resigned as the head of the Tibetan government in exile, passing down his political powers to the prime minister. 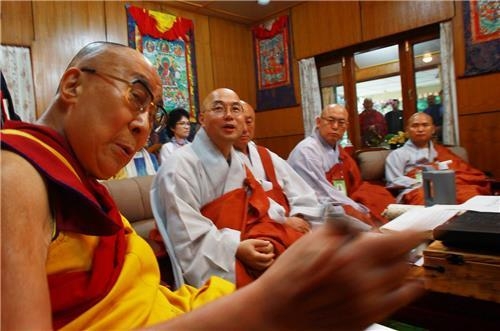 As part of his messages to South Korean Buddhists, the Dalai Lama emphasized the need for "learning and being self-disciplined."

"Most of the Buddhists are faithful to the traditional mantra reading and worshiping, but have become loose on learning and self-discipline," he said. "I'm afraid the current circumstances might make them lag behind our time.

"Mere belief does not lead to the sustainable practice of Buddhism," the spiritual leader insisted, asking Korean followers to take time in learning and pondering upon the Buddhist teachings.

During the talk, the Dalai Lama extended words of gratitude to the committee, led by Venerable Kumkang and Venerable Jinok, for years of continued efforts to invite him to the country. 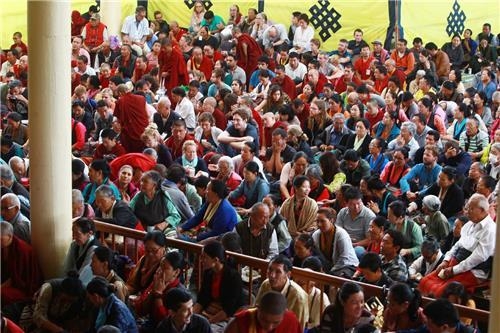