SEOUL, Sept. 1 (Yonhap) -- A new drama co-produced by South Korea and China will attempt to depict the famous 1592 war against Japan in a way that promotes viewers' understanding of the people and warfare involved in the conflict, producers said Thursday.

The "Imjinwaeran" war, which lasted from 1592-98, is best remembered in Korea as a series of successful naval battles led by Admiral Yi Sun-shin. With a significantly smaller fleet, Yi won all 46 battles he fought against invading Japanese forces, making him one of the most revered heroes in Korean history.

In "1592 War," veteran South Korean actor Choi Soo-jong plays Yi. Producers stressed it is the first factual drama to be made in the country. 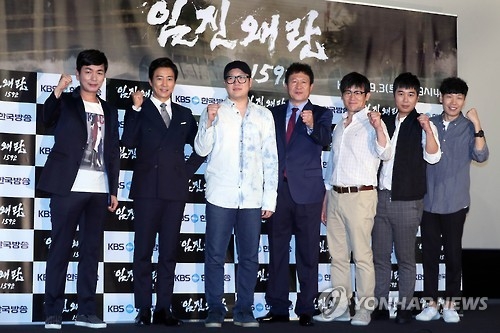 "While an epic drama shows the big picture, a factual drama is short and goes into the micro details based on factualism," co-producer Kim Han-sol told reporters at a cinema in central Seoul after a screening of the second episode. "It shows in detail why Toyotomi Hideyoshi waged the war, the tactics Yi Sun-shin employed, and how the turtle ship was steered from right to left."

Kim stressed that the producers tried hard to be "mechanical and neutral" in portraying the Japanese side of the story because they believed that would heighten the drama's historical value.

As the series was co-produced by South Korean public broadcaster KBS and China's state-run CCTV, Kim said the two sides agreed not to interfere in depictions of the other country's history.

"For me, there was great meaning and joy in producing the first South Korean-Chinese drama to be aired on Chinese terrestrial TV for 1.3 billion to see," he said.

Choi, who has starred in multiple period dramas in the past, said the fact that "1592 War" was a factual drama increased the challenge for him.

"Rather than interpreting creatively through discussions among the producers, writers and actors, I spent much longer listening to instructions as to how I should express something based on the actual emotions," the actor said, referring to the drama's strict reference to historical records. "It was more challenging than ever, but I tried hard to express a new side of Yi Sun-shin."

South Korean actor Kim Eung-soo played Hideyoshi, the Japanese warrior and politician who launched the invasions with the aim of conquering both Korea and China. The five-part series has devoted one entire episode to the man to shed light on his character and the motivations that drove his actions.

Kim, who speaks fluent Japanese, said he was immediately drawn to the script, which was part written by Kim Han-sol, so much so that he could remember 70 percent of the lines after reading it three times.

The actor also studied Japanese historical records in their original language to gain a better understanding of the "villain."

"In order for the good to be seen, the evil must firmly be by its side. Only then will a drama shine," he said. "My friends asked me why I didn't play Yi Sun-shin. I told them I would next time," he added jokingly.

New drama zooms in on 1592 war with Japan

New drama zooms in on 1592 war with Japan