Park will set off on Friday for an eight-day trip to Russia, China and Laos where she will attend back-to-back summits with the leaders of major powers and partner nations, including U.S., Chinese and Russian Presidents Barack Obama, Xi Jinping and Vladimir Putin.

Her three-nation trip comes at a crucial juncture when Seoul has been struggling to find a breakthrough in the nuclear stalemate with Pyongyang, which has recently been ratcheting up cross-border tension with its missile provocations and belligerent rhetoric.

The communist regime's recent test of a submarine-launched ballistic missile (SLBM) has further worsened the already taut inter-Korean relationship, making it difficult for the two Koreas to pursue rapprochement.

"It is important to discuss joint efforts in finding a breakthrough in the current stalemate with North Korea when Park meets with the leaders of major powers, particularly the U.S. president," he said.

The professor added that Seoul and Washington should accelerate efforts to tackle the nuclear conundrum as the efforts could lose traction due to domestic political events. The U.S. is set to hold a presidential election in November, while South Korea will hold its own in December next year.

Above all, the most pressing task for Park is to address tension with Beijing and Moscow over the recent decision by Seoul and Washington to deploy an advanced U.S. anti-missile system to the Korean Peninsula.

China and Russia have strenuously opposed the plan to station a Terminal High Altitude Area Defense (THAAD) system on South Korean soil, arguing that it would needlessly destabilize the regional security landscape and undermine their security interests.

Their opposition has triggered concerns that Beijing and Moscow, the two key players in the implementation of international sanctions against Pyongyang, would become less willing to faithfully implement the sanctions.

The sanctions were imposed in March in response to the reclusive state's nuclear test in January and long-range rocket test the following month.

During her separate summits with Xi and Putin, Park is expected to reiterate that the THAAD deployment is an inevitable, self-defense measure to counter Pyongyang's evolving nuclear and missile threats. 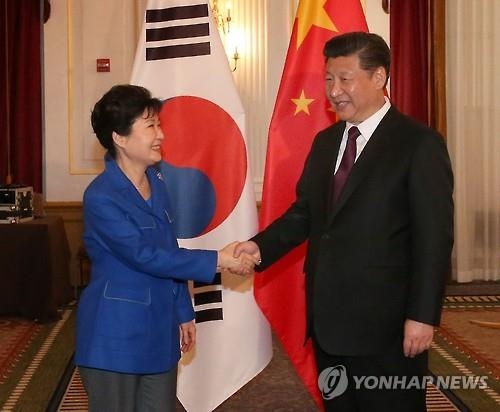 Park could utilize the North's recent SLBM launch to strengthen the case for the THAAD installation, observers said.

The latest SLBM test is seen as a success as it travelled some 500 kilometers. Military officials here said that had it been fired at a lower -- normal -- angle, it would have flown some 1,000 km.

"The North's latest launch of the SLBM would help strengthen our rationale for the deployment of THAAD here," said Nam Chang-hee, a security expert at Inha University. "We should make the best use of it to persuade Beijing and Moscow over the need for it."

Another crucial task for Park's summit diplomacy this time is to explore ways to cement economic ties with Russia and Laos to help revitalize the South Korean economy, Seoul officials and analysts said.

During her attendance at the Eastern Economic Forum (EEF) and a summit with Putin in Vladivostok, Park will seek to strengthen economic cooperation with Russia, particularly in the development of Russia's Far East, a resource-rich yet underdeveloped region.

The EEF is an annual forum that Putin launched last year to bolster regional cooperation in the development of the Far East. The forum is in connection with Russia's efforts to strengthen its relations with East Asia, which has emerged as the center of global power and wealth.

During her visit to Vladivostok, an economic delegation consisting of 70 South Korean firms will accompany Park to explore ways to tap into the Russian market. Those firms specialize in various areas, including infrastructure development, healthcare and medicine, Park's office said.

"Russia has been pushing to develop its far eastern region in line with its New Eastern Policy," Kang Seog-hoo, senior presidential secretary for economic affairs, told reporters. "We anticipate that on the occasion of Park's visit to Russia, South Korea can expand the foundation upon which South Korean firms can make inroads into Russia's Far East." 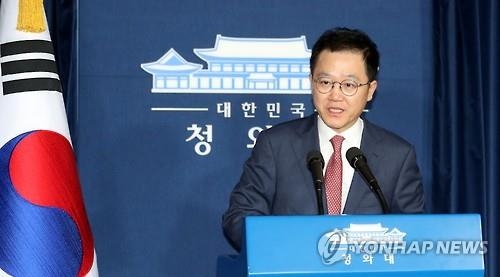 The initiative has shifted its foreign policy focus to Asia from Europe. The shift came as Russia has maintained diplomatic tension with Europe amid the North Atlantic Treaty Organization's eastward expansion and the Ukraine crisis.

During her visit to the Laotian capital of Vientiane starting Tuesday for four days, Park will also seek to bolster economic ties with the Southeast Asian state. Park will be accompanied by an economic delegation of 81 South Korean firms.

"Laos is the fastest-growing economy in Southeast Asia, and there is great potential for bilateral economic cooperation given the mutually complementary economic structure," Kang, the presidential aide in charge of economic affairs, said.

"Through this visit, South Korea will establish the framework for multi-faceted economic cooperation in areas such as trade, investment, infrastructure, healthcare and culture," he added.