Son did everything but get on the score sheet at Seoul World Cup Stadium, where the 48th-ranked home team fended off a late flurry by the visitors ranked No. 78.

Son kickstarted the South Korean offense with a hard shot in the 17th minute, a play that sent a jolt through what had been a cautious, if dull, match.

It was Son's free kick that led to the opening goal of the night in the 20th minute. After Oh Jae-suk was brought down on the top left corner of the box, Son stepped up and sent a sharp kick toward the Chinese goalmouth.

In a mad scramble, midfielder Ji Dong-won managed to get his head on the ball, but it ultimately went in off the leg of Chinese midfielder Zheng Zhi.

Son remained active on the attack, and shot one high over the net in the 54th, trying to swing the momentum back in South Korea's favor after China came out firing in the second half.

Son played the role of a creator again on the team's third goal. Lee Chung-yong had made it 2-0 with a 62nd-minute header, and Son found Koo Ja-cheol with a perfectly placed cross from the left flank four minutes later. As the ball traveled through the Chinese goalmouth and past defenders, Koo only needed to poke it home for a three-goal lead. 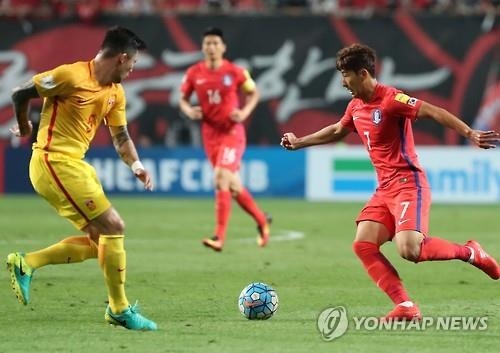 Though South Korea had to sweat out the final moments when China scored two quick goals, they made Son's efforts count in the end.

Son's final chance to get on board was foiled in the 86th by goalkeeper Zeng Cheng.

Son competed at last month's Rio de Janeiro Summer Games, but his bid for an Olympic medal ended in tears, as Honduras beat South Korea 1-0 in the quarterfinals.

Son had a handful of opportunities in that match, only to be denied by goalkeeper Luis Lopez. South Korea couldn't solve the hot custodian, and Son bore the brunt of criticism for the team's futility.

Son then became the subject of persistent transfer rumors, with teams in the Bundesliga, his former stomping ground, reportedly interested in his service. The Spurs, though, decided to retain him and keep him in their plans for at least another season.

With the off-field distraction behind, Son performed Thursday like he's often capable of -- with panache and controlled abandon.