SEOUL, Sept. 1 (Yonhap) -- Almost a year to the date since his last international goal, South Korean midfielder Lee Chung-yong ended the drought in style in the team's 3-2 win over China in Thursday's World Cup qualifier.

Lee's powerful header, set up by a pretty cross from Ji Dong-won in the 63rd minute, gave South Korea a 2-0 lead at Seoul World Cup Stadium. The hosts were just holding on to a 1-0 lead provided by an own goal from Zheng Zhi, and the visitors had come out firing to start the second half.

Lee's goal shifted the momentum back in South Korea's favor, and suddenly awakened to life, the home side made it 3-0 on Koo Ja-cheol's goal three minutes later.

The hosts nearly wasted Lee's production, as China stormed back with goals by Yu Hai and Hao Junmin in a three-minute span. Goalkeeper Jung Sung-ryong made some crucial saves to preserve the one-goal victory.

Lee's last goal for South Korea came against Laos on Sept. 3 last year. The 28-year-old has been a mainstay for the country since 2008, but unable to get on the pitch for Crystal Palace toward the end of last Premier League season, Lee was left off the team for friendlies against Spain and the Czech Republic in June.

Lee had never missed the national team for reasons other than injuries.

Lee had a trying Premier League season on and off the field, even earning himself a suspension for criticizing his coach in an interview with a South Korean news site. 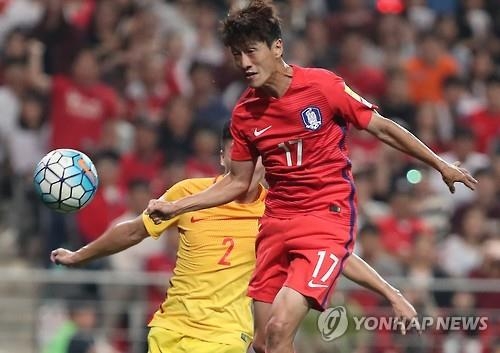 The playmaker has enjoyed a fresh start so far this season, though, starting the first two matches and coming off the bench in the third.

Lee's new fortunes were not lost on South Korea coach Uli Stielike, who often stresses that getting regular action with clubs is his top priority in national team selection.

Stielike tapped Lee for the starting winger position Thursday, and the player responded with a resounding goal.

"I am pleased to have scored a goal and contributed to the team's victory," Lee said afterward. "But I don't think I played all that well today. I want to be ready for the next match."

Though South Korea let China creep back into the match with two late goals, Lee said he and his teammates never let up even with a three-goal advantage.

"We tried to keep the pressure on, and I don't think any of us really let our guard down," Lee said. "But that's just football. You never know what's going to happen. We could play another match like this (in the qualifying round) and we'll run into our share of obstacles."

Lee has played in each of the past two World Cups, and understands as well as anyone the road to the big tournament is never easy.

"I think this match will remind the players, whether they've been through the qualification stage or not, that things won't always be smooth sailing," he said. "I think it will make all us to bear down and work even harder for upcoming matches."

Lee said playing on a more regular basis at the club level certainly helped his cause internationally, adding, "I've played quite a bit in preseason and also in the regular season, and I felt comfortable out there tonight."