SEOUL, Sept. 2 (Yonhap) -- President Park Geun-hye will leave for Russia on Friday to attend an economic forum and a summit with her Russian counterpart Vladimir Putin, as part of her eight-day trip that also includes visits to China and Laos.

On Saturday, the second day of the forum, Park will deliver a keynote speech to put forward her vision for cooperation with Russia in the development of the Russian Far East, her office Cheong Wa Dae said. 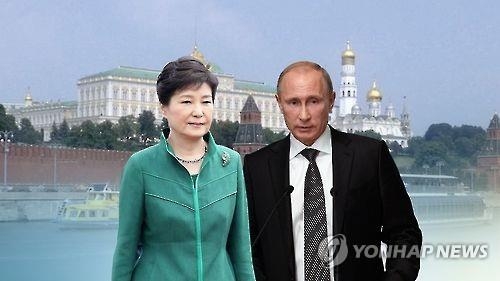 The two leaders held talks on the sidelines of the Group of 20 summit in Saint Petersburg, Russia, in September 2013; during Putin's visit to Seoul in November 2013; and at the U.N. conference on climate change in November 2015.

Following Park's visit to Russia, she will travel to Hangzhou, China, to attend the G-20 summit of advanced and emerging economies.

From Wednesday to Thursday, Park will attend the South Korea-ASEAN summit, the ASEAN-plus-three summit, which involves South Korea, China and Japan, and the East Asia Summit (EAS), all of which will take place in the Laotian capital.

Park to leave for Russia to attend economic forum, summit with Putin

Park to leave for Russia to attend economic forum, summit with Putin