SEOUL, Sept. 2 (Yonhap) -- South Korea's ruling Saenuri Party agreed to return to the National Assembly and end the protest against the parliamentary speaker on Friday, ending the struggle sparked by progressive-leaning remark made by the speaker earlier this week.

Following the decision, the Saenuri agreed to hold a regular session on Friday to pass the much-awaited extra budget bill. The parliamentary session, however, will be chaired by vice speaker Park Joo-sun of the minor People's Party.

On Thursday, the ruling party refused to join any of the scheduled parliamentary events, after Chung lent support to opposition parties on the deployment of a U.S. missile defense system.

Chung said he feels responsible for causing delays on parliamentary procedures, including the extra budget bill, and said he wishes to express an apology to the people.

"The speech came from my heart to reflect the voice of the people, and I would like to make it clear that there were no other intentions," Chung said.

"I would also like to acknowledge the issues which lawmakers of Saenuri pointed out (concerning political neutrality), he added.

Saenuri had said the remark violated the legal obligation of the office to maintain political neutrality.

The protest by Saenuri had emerged as a major drag on core parliamentary issues, such as the passage of the extra budget bill. 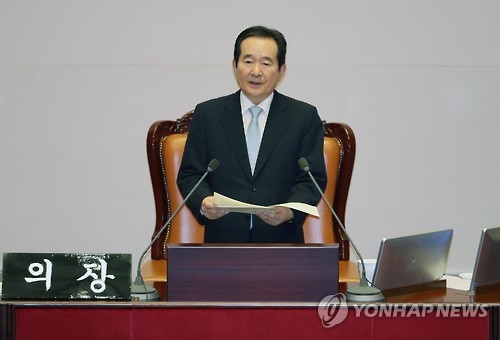