SEOUL, Sept. 2 (Yonhap) -- South Korea's fishing industry suffered damage due to scorching heat that has settled in the country and the outbreak of cholera, the maritime ministry said Friday.

According to the Ministry of Oceans and Fisheries, the local fishing industry is estimated to have suffered damage worth 8.5 billion won (US$7.3 million) as massive amounts of fish and shellfish in fishing grounds died across the country.

The amount is bigger than in 2013 when toxin-laden red tides spread along the southern coast of the country, resulting in 5.2 billion won in losses.

The optimal water temperature for fishing grounds is between 22 and 24 C, but the temperature as of late has spiked up to 30 C, officials said.

Since July, South Korea has experienced record-high heat, with Seoul's average daily high hovering around 35 C and its daily low remaining over 25 C.

The outbreak of cholera in the southern part of the country also added to the industry's problems as three patients were found to have been infected with the waterborne disease after eating seafood.

The Korea Centers for Disease Control and Prevention (KCDC) said all three people consumed seafood at different restaurants on the southern island of Geoje.

Genes of the cholera bacteria obtained from the three infected people are identical, which means they were infected from the same source, the KCDC said. 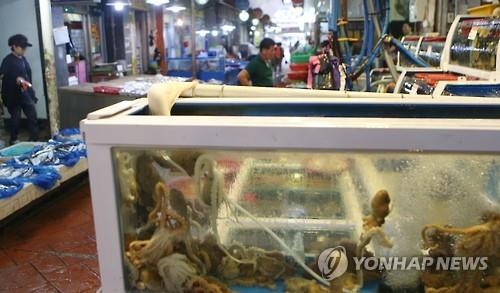