Samsung purchased the California-based company in early August, expanding its business portfolio into ultra-premium home appliances in the U.S. market.

Yoon Boo-keun, president of Samsung's consumer electronics division, told reporters on the sidelines of the IFA tech fair in Germany that Samsung is preparing to launch its premium brand under the name of Dacor.

Yoon said the Dacor brand will also be used in the European market.

Based in southern California, Dacor has produced professional-quality cooking ranges for homes and in-home ventilation hoods.

Samsung raised its share in the U.S. home-appliance market for the second quarter of this year, widening its lead over competitors, according to a market estimate.

During the IFA show, Samsung has showcased a range of high-end home appliances, including quantum dot TVs and smart washing machines. 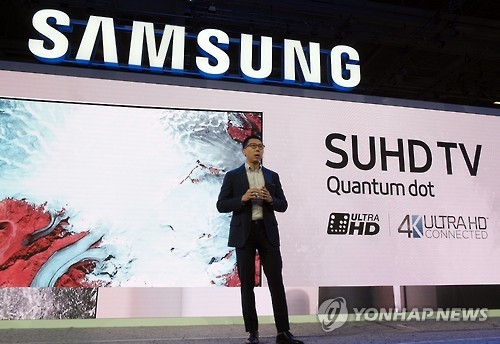 To increase sales of quantum dot TVs, Samsung is bolstering partnerships with Amazon and Netflix.

In a statement, "(Samsung) announced a new 10-year warranty for its SUHD TVs with quantum dot display, protecting consumers against the effects of burn-in for an entire decade."

Yoon said premium TVs using the quantum dot technology are expected to lead the global TV market over the next decade.

In addition, Samsung displayed high-end refrigerators that are connected with other devices via the Internet of Things (IoT) technology.

The IoT technology, which connects objects to the Internet and allows them to send and receive data, is seen as a key evolution.

Yoon said the IoT technology will have a huge business potential on consumer electronics and the telecommunications industries.

Samsung plans to roll out its new products using the IoT technology in South Korea next year, Yoon said.
(END)

Samsung to use Dacor brand for luxury home appliances

Samsung to use Dacor brand for luxury home appliances