The Ulchi Freedom Guardian (UFG) exercise, which began on Aug. 22, focused on dealing with a potential inter-Korean conflict, with 25,000 American forces and 50,000 Korean soldiers participating in the annual drill, the defense ministry said. 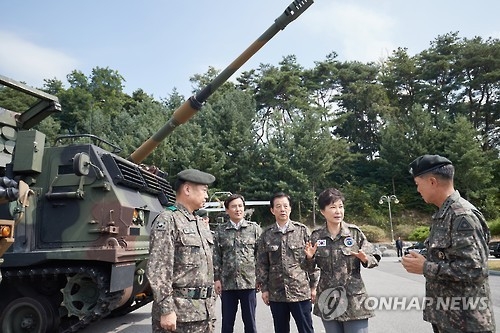 In a media roundtable held on Aug. 24, Gen. Robert B. Brown, commander of the U.S. Army Pacific Command, said, "The more exercises we can do together, the better prepared we will be should North Korea do something stupid and try to attack South Korea."

"But this time, the drill reportedly included a training drill that outlines possible pre-emptive attacks on the North's nuclear and missile facilities," the official said.

In an apparent protest against the drill, North Korea test-fired a submarine-launched ballistic missile early on Aug. 24. The missile flew some 500 kilometers over the East Sea, the greatest distance the communist nation has achieved since it began SLBM tests last year.

In its latest condemnation against the exercise, North Korea described it as a massive war game aimed at invading the communist regime.

North Korea's representative office in the inter-Korean truce village of Panmunjom warned in a white paper released on Friday, "We will launch an unsparing pre-emptive nuclear strike should there be any signs of an invasion."

The alliance's other major military drills include Key Resolve, another CPX, and the field training exercise (FTX) Foal Eagle. From March to April, they held the two exercises following the North's fourth nuclear test in January and long-range rocket launch the following month.