SEOUL, Sept. 2 (Yonhap) -- The U.S. Embassy in Seoul has expressed concern over a court's ruling that allows protests near its diplomatic mission, saying it could pose a threat to the safety and security of its facilities and personnel, a local lawmaker said Friday.

Rep. Jin Sun-mee of the main opposition Minjoo Party of Korea revealed the letter the embassy sent under the name of its security attache Keith Byrne to the chief of Jongno Police Station in July, seeking protection from and restriction on the rallies near the mission in central Seoul.

In June, the Seoul Administrative Court ruled in favor of a local civic group that sought nullification of the police's ban on holding a rally within 100 meters of the U.S. Embassy.

Under the country's Assembly and Demonstration Act, people are prohibited from holding demonstrations anywhere within a 100-meter radius of the boundary of diplomatic offices or the residences of heads of the missions.

The court, however, cited an exceptional clause that said a rally can be held within the area when it would not escalate into a large-scale assembly or demonstration.

The rallies held by the Solidarity for Peace and Reunification of Korea between February and September last year were always in the size of around 50 and had never developed into a large-scale rally, the court said.

The embassy, however, said, "Even peaceful protests can turn violent at any time."

"Allowing police authorities to restrict all protests and demonstrations at a safe distance from foreign missions is a prudent measure to ensure the safety and security of embassy facilities and personnel," the letter said.

The Jongno Police Station said it has still been prohibiting rallies from being held within 100 meters of diplomatic missions as the case is still pending at the appeals court. 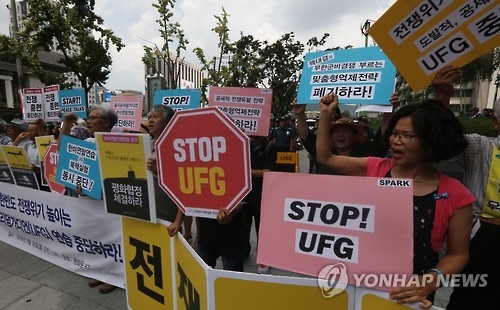