SEJONG, Sept. 2 (Yonhap) -- South Korea will pour more than 65 trillion won (US$58.1 billion) into the local economy next year to revitalize the economy, which has been plagued by faltering exports and rising uncertainties in the global market, the trade ministry said Friday.

Out of the 400.7 trillion won budget for 2017, which was endorsed by the Cabinet earlier this week, the government set aside more than 16 percent of the total to revive the economy, boost exports and support small- and mid-sized enterprises (SMEs).

According to the Ministry of Trade, Industry and Energy, some 600 billion won, up 42.5 percent from a year earlier, was earmarked for boosting exports, the key driver of Asia's fourth-largest economy.

But experts remained cautious that the upturn will hardly go on through the remaining months of 2016 and in 2017, due to a prolonged slowdown in the world economy and a possible financial turmoil sparked by a U.S. rate hike.

To tackle such headwinds next year, the government will create an export voucher program worth 177.8 billion won designed to give consulting services and other related benefits to troubled local exporters.

Some 15 billion won will be used to promote exports of potential sectors like cosmetics, pharmaceuticals and fashion, which accounted for 4.4 percent of the country's entire exports of $241.8 billion in the first six months.

The government will spend the bulk of the 2017 budget, or 56.6 trillion won, on creating jobs, expanding the transportation network across the country and carrying out urban redevelopment projects. 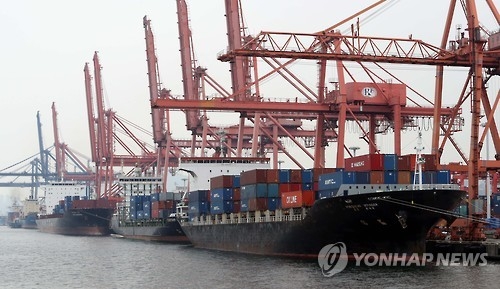