In an interview with Russia's state-run news agency, Rossiya Segodnya, Park stressed that if Pyongyang's escalating military threats are eliminated, the need for the deployment of a Terminal High Altitude Area Defense (THAAD) system will "naturally" dissipate.

The interview was published before Park leaves for Russia's far eastern port city of Vladivostok to attend the Eastern Economic Forum and a summit with Russian President Vladimir Putin, as part of an eight-day trip that will also take her to China and Laos.

"There is no reason, nor practical benefit, for the THAAD system to target any third country, and the Korean government does not have any such intentions or plans," Park said in the interview. 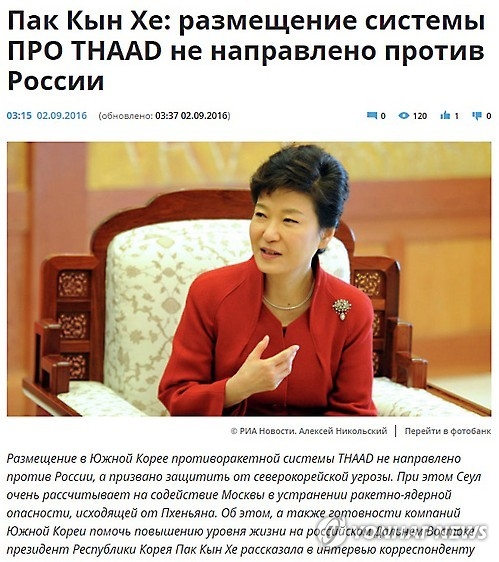 Since Seoul and Washington announced their plan in July to station THAAD in South Korea by end-2017, Moscow, along with Beijing, has strenuously opposed it, arguing the deployment would only escalate military tension in East Asia and hurt its strategic security interests.

During her summit with Putin, slated for Saturday, Park is expected to seek understanding from Moscow over the deployment plan.

In the interview, Park said she would hold "heart-to-heart" talks with Putin over North Korea-related issues, underscoring that Pyongyang's nuclear and missile programs pose a "hefty stumbling block" to bilateral cooperation in the development of Russia's Far East.

Park, in addition, said that Moscow is in a "special position" to lead the efforts to pressure Pyongyang to end its nuclear ambitions given that it is a veto-wielding member of the U.N. Security Council and strong advocate of the global nuclear nonproliferation regime.

"Since the resolution of North Korea's nuclear and missile issues would provide significant thrust for the mutual development of our two countries and the Far East, I look forward to continuing bilateral cooperation in bringing about such changes with a long-term vision," she said.

Park then voiced hope that the scope of bilateral economic cooperation will expand into more diverse fields in Russia's Far East, including fisheries, agriculture, infrastructure, health care and medical services.

She also expressed her expectations for increased cooperation between South Korea and the Eurasian Economic Union (EAEU), an economic alliance consisting of Russia, Armenia, Belarus, Kazakhstan and Kyrgyzstan.

South Korea and the economic union have been conducting a joint feasibility study on their free trade agreement over the last nine months.

"I anticipate that a Korea-EAEU FTA will give impetus to economic integration and trade liberalization in Eurasia, thereby contributing to achieving shared economic growth and promoting consumer benefits," she said.