SEOUL, Sept. 2 (Yonhap) -- Hanjin Shipping Co., South Korea's leading container shipper currently under receivership, said Friday that 45 of its ships, including 41 container carriers, have been stranded at sea worldwide due to port entry denials in many nations.

The world's seventh-largest shipper was put under receivership on Thursday, a day after it filed for court protection after its creditors, led by the state-run Korea Development Bank, rejected its self-restructuring plan.

Since late last month, some of Hanjin Shipping's fleet have been denied access to ports in China, Japan, Singapore, India and other nations as workers demand that the shipper has to pay fees in arrears and in cash in advance.

The shipper said one of its vessels was denied passing through the Suez Canal. Hanjin Shipping has a fleet of 98 ships directly run by itself, including its own 37 vessels. 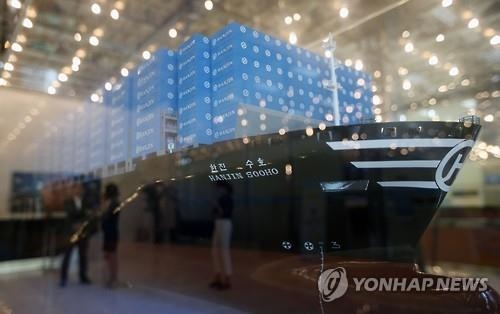 With the receivership application accepted, the shipper got a chance to revive itself, but it is still unclear whether it can avert liquidation.

Hanjin Shipping's assets are frozen during a deliberation period, and new management is required to come up with a new rehabilitation plan by Nov. 25. The shipper's debts are estimated at some 6 trillion won (US$5.37 billion) as of the end of June.

There have been speculation that Hanjin Shipping may be liquidated as its fleets are seized by creditors, forcing its clients to cancel their contracts with the shipper.

Also, Hanjin Shipping said earlier its membership in the CKYHE shipping alliance has been suspended, which means that its cargo shipping may face further troubles.

Meanwhile, the receivership filing has sent ripples through the country's cargo exports with some vessels of the top shipper denied entry to Busan port, the No. 1 port here, and its clients struggling to find alternatives for their shipments.

Clients are also searching for alternative shippers for their goods as Hanjin Shipping's vessels are feared to be seized by its creditors.

Hanjin Shipping said earlier one of its container vessels was already seized in Singapore by a creditor.

The country's maritime ministry said earlier that it will work to help smooth out flows in the cargo trade for local exporters and importers by putting in substitutes for Hanjin's vessels that may be seized.

Hyundai Merchant Marine Co., the country's No. 2 shipper, plans to deploy 13 ships on Hanjin Shipping-operated routes to the American and European regions. 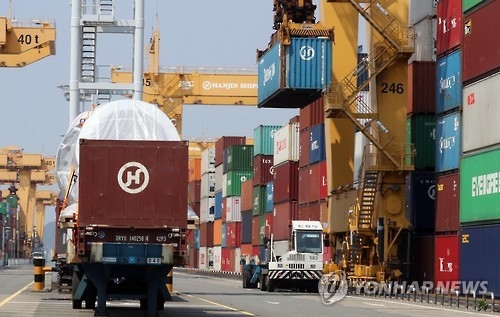