Presidential spokesman Jung Youn-kuk told reporters that the official appointment of the culture and agriculture minister nominees -- Cho Yoon-sun and Kim Jae-soo -- will proceed "according to due legal procedures."

By law, the president can appoint minister nominees without the National Assembly's approval, though parliamentary hearings must precede their official appointment.

On Thursday, opposition parties alone adopted a confirmation report on Kim, which called him "unfit" for the ministerial post due in large part to alleged irregularities in his purchase of a house in 2001.

The confirmation report was adopted solely by the opposition parties, as the lawmakers of the ruling Saenuri Party boycotted the confirmation hearing on Kim in protest of controversial remarks by Assembly Speaker Chung Sye-kyun.

During a speech marking the opening of a regular parliamentary session, Chung made remarks critical of the president’s refusal to dismiss one of her senior secretaries mired in a corruption scandal. He also criticized the planned deployment of a U.S. anti-missile system to the Korean Peninsula.

The process of adopting a confirmation report on the culture minister nominee has been delayed due to the partisan dispute over Chung's remarks and other issues. 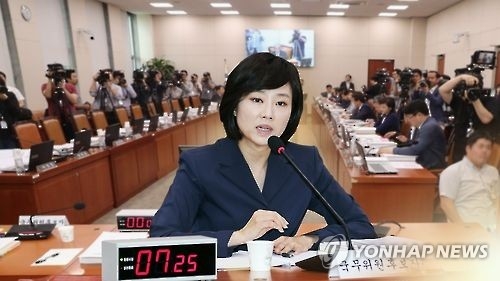