Hwang joined the South Korean squad as a replacement for Son Heung-min, who will return to Tottenham Hotspur this weekend. After defeating China 3-2 on Thursday, head coach Uli Stielike announced the Seongnam FC target man will fill in for Son against Syria on Tuesday.

"I was surprised when I received the call-up to join the squad," Hwang told reporters at the National Football Center in Paju, north of Seoul, the training facility for the national team. "I will give my utmost effort to help this team."

Stielike would have kept Son against Syria if he had left Tottenham during the summer transfer window. The 24-year-old attacker had been linked with a move to the German side Wolfsburg. But after his transfer talks fell through, Son had to return to his English Premier League club under the previous agreement between the Korea Football Association and Tottenham, according to Stielike.

Stielike said he selected Hwang because the striker had played with other national team members before. The 24-year-old represented South Korea in friendly matches against Spain and the Czech Republic in June. However, for South Korea's squad for the final Asian qualifying round for the 2018 FIFA World Cup this month, he was only on the reserves list.

Hwang, who has one goal in eight international matches, said that he wasn't disappointed when he failed to earn the selection in the first place.

"When I first heard I wasn't on the squad, I just thought my performance wasn't good enough (to receive a call-up)," he said. "Since I've joined this team in a difficult way, I really want to be a player who can make contributions. As a forward, I want to focus on scoring goals and delivering assists."

Against Syria, South Korea will aim to collect their second straight win in the final round. The match will take place at Paroi Stadium in Seremban, Malaysia, since Syria can't host World Cup qualifiers at home due to the ongoing civil war. The Taeguk Warriors will depart for Malaysia on Saturday.

Hwang said that he isn't feeling the pressure of playing in the last phase of the regional qualification. The striker, who has netted eight goals in 28 matches at the top-tier K League Classic so far this season, said he just wants to score goals.

"I know the atmosphere of the final round is completely different from the second round," said Hwang, who has played in four second-round matches. "Whenever I come to the national team, I try to learn something. If I can play against Syria, I want to score goals." 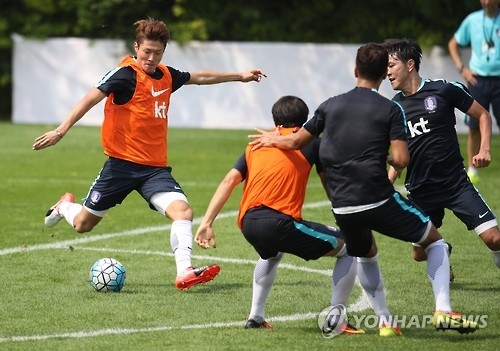