SEOUL, Sept. 2 (Yonhap) -- Most South Koreans are opposed to the removal of a girl statue symbolizing Korean wartime sex slaves that is located in front of the Japanese Embassy regardless of a landmark deal reached between Seoul and Tokyo last year, a survey showed Friday.

In the survey conducted by local pollster Gallup Korea, 76 percent of South Koreans polled said they were against the relocation, with those that said it can be moved standing at just 10 percent of the total. The survey showed the remaining 14 percent of respondents failing to give a reply.

The nationwide survey was conducted from Tuesday through Thursday and checked 1,009 adults living in the country.

In the previous poll conducted in the first week of January, right after the deal was reached on Dec. 28, 72 percent expressed opposition to the relocation, while 17 percent said they support such a move.

Following up on the agreement to put an end to the historical feud, Japan paid 1 billion yen (US$9.69 million) on Wednesday to a South Korean foundation aimed at helping the victims restore their honor.

With the transfer of the funds, Japan has also increased its calls to remove the life-size statue of the girl who sits in a chair with clenched hands.

When the same question was asked in January, 19 percent said they think Japan apologized, with 72 percent answering negatively.

In the latest poll, 63 percent of respondents said South Korea should push for a renegotiation, while 21 said it should not.

The margin of error was plus or minus 3.1 percentage points with a confidence level of 95 percent.

"The public stance on the relocation of the statue, views towards the Japanese government's attitude and calls for renegotiation have become sterner compared with January," the pollster said.

Gallup Korea said any attempt to relocate the statue could run into serious opposition. 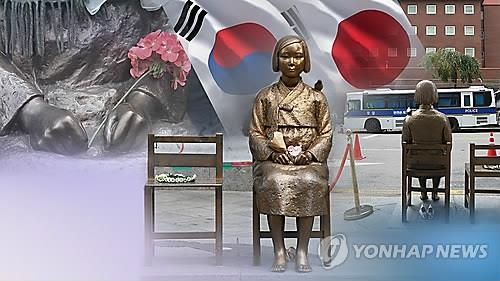