Brooks and Haney reviewed the U.S. response to North Korea's continued development of ballistic missiles and weapons of mass destruction at the meeting, one of several high-level discussions the former attended in Washington, D.C., on Sept. 1 (U.S. time), the USFK said. 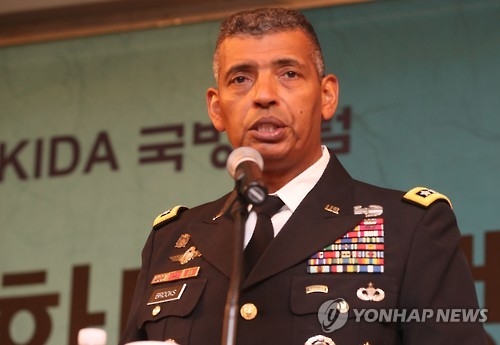 "The meeting reinforces the partnership between USSTRATCOM and USFK to deter North Korea, defend South Korea, and ensure stability on the Korean peninsula," according to the Facebook post.

This year, North Korea has stepped up its saber-rattling by conducting its fourth nuclear test in January and missile launches in the following months, most recently in protest against South Korea's decision to deploy an advanced missile defense system in a southeastern rural county by 2017, and a joint military drill between Seoul and Washington which ended Friday.

In its latest provocations, it test-fired a submarine-launched ballistic missile (SLBM) early on Aug. 24. The missile flew some 500 kilometers over the East Sea, the greatest distance travelled by an SLBM launched by the communist nation so far.