SEOUL, Sept. 2 (Yonhap) -- The daily foreign exchange (FX) turnover by local and foreign banks in South Korea slightly rose in April from three years ago, pushing up the nation's global ranking in the foreign exchange market by one notch to 14th, the Bank of Korea (BOK) said Friday.

The daily volume of FX trading here averaged US$47.81 billion in April, inching up 0.6 percent from April 2013, the central bank said, citing data by the Bank for International Settlement (BIS). 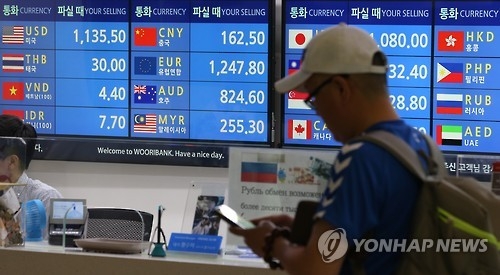 The average turnover of the global FX market was at $5.1 trillion in April, down 5 percent from three years ago, the BOK said.

It is the first time that the global trading volume has retreated since the BIS report was first released in 1986, mostly attributable to the drop in spot exchange trading, it said.

The ratio of South Korea in the global FX market transactions was steady at 0.7 percent, the BOK said.

By currency, the U.S. dollar took an overwhelming 87.6 percent of the total settlements, while the euro and Japanese yen accounted for 31.3 percent and 21.6 percent, respectively.

The daily turnover of South Korea's over-the-counter interest rate derivative market dropped 15.6 percent from April 2013 to $6.62 billion in April, a sharp contrast to the global market's 15.4 percent rise to $2.7 trillion over the same period, the central bank noted. Thus South Korea's share of the market stood at 0.2 percent with its global ranking rising two notches to 17th, it added.