PAJU, South Korea, Sept. 2 (Yonhap) -- South Korea football head coach Uli Stielike on Friday urged his players to stop making mistakes after a narrow victory against China as they start on the final road to the 2018 FIFA World Cup.

South Korea settled for a 3-2 win Thursday after squandering a three-goal lead at home. The result forced South Korea to sit in second place in Group A of the final Asian qualifying round. Iran sits in the top spot on goal difference after beating Qatar 2-0.

South Korea will face Syria on Tuesday in Malaysia in pursuit of their second straight victory. Syria, which lost 1-0 to Uzbekistan in their opener, can't host World Cup qualifiers at home due to the ongoing civil war.

But before flying to Malaysia on Saturday, Stielike said his players should take better care of the ball this late in the qualification stage.

"A single mistake can determine the match result," he told reporters at the National Football Center in Paju, north of Seoul, the training facility for the national team. "For the qualifiers in the final round, we must be wary of making mistakes."

Against China, South Korea surrendered two goals in a three-minute span in the second half after leading 3-0. Yu Hai first took advantage of left back Oh Jae-suk's poor clearance to put the visitors on the board. Then Hao Junmin curved a free kick over the wall to beat goalkeeper Jung Sung-ryong to make 3-2.

"A team like ours can't be conceding goals like China's first one in yesterday's match," he said.

Stielike added South Korean players should also reduce pass mistakes. South Korea had 93 percent pass success rate in the first half against China, completing 275 of 295, according to data from the Korea Football Association (KFA). In the second half, however, the pass completion rate plunged to 87 percent after only 154 of 178 passes were made successfully.

In particular, a botched pass by right back Jang Hyun-soo gave Chinese forward Wu Lei an uncontested chance for an equalizer in the 40th minute. Fortunately for South Korea, Wu missed the target.

"The result of pass mistakes committed against teams like Iran or China is different from the mistakes made against Myanmar or Laos," Stielike said.

The coach said he spoke with captain Ki Sung-yueng about the team's performance against China.

"I discussed the struggle that we had in the last 15 to 20 minutes of the game," he said. "The coach can tell the players what to do, but it's important that they first figure out their solution to the problem." 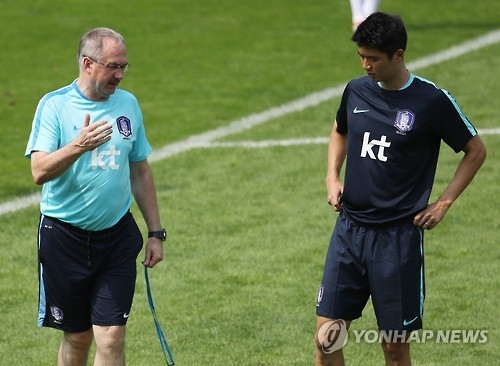