SEOUL, Sept. 2 (Yonhap) -- Samsung Electronics Co. on Friday announced an unprecedented global recall of its Galaxy Note 7 after several of the phablets caught fire while being charged, promising to offer new replacements to all of the buyers at home and abroad.

Samsung apologized for the recall in a news conference in Seoul, saying that its investigation has found the fire was caused by faulty battery cells.

Koh Dong-jin, head of Samsung's mobile business division, told reporters that only 24 out of 1 million Galaxy Note 7 smartphones have been found with the faulty battery. 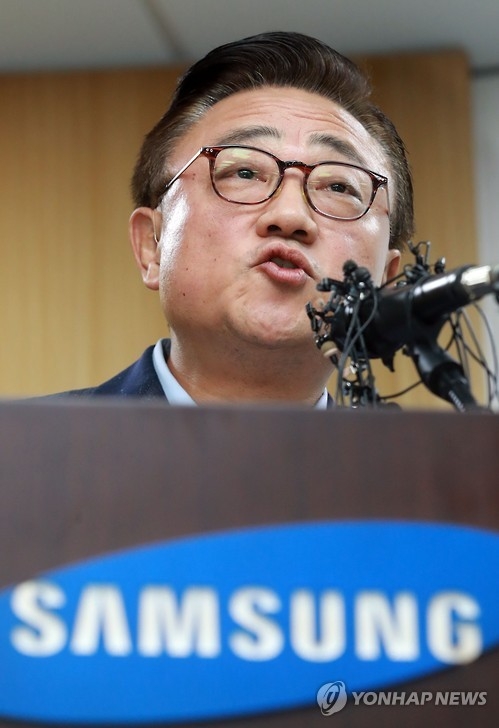 "As of Sept. 1, a total of 35 claims were registered with Samsung's service centers at home and abroad. Only 24 units on a scale of 1 million were affected by the battery problem," Koh said in the conference.

Samsung will replace all Galaxy Note 7 handsets sold at home and abroad with new ones, regardless of the date of the purchase, Koh said.

"By putting our top priority on customer safety, we've decided to halt sales (of Galaxy Note 7) and offer new replacement handsets to all customers," Koh said.

About 1.5 million units have been sold or in inventory worldwide, meaning that the battery defect rate for Galaxy Note 7 is put at 0.0024 percent.

It is the first time that Samsung, the world's largest smartphone maker, has decided on a large-scale recall of its smartphones.

"Samsung, together with its battery suppliers, has been conducting a close analysis to identify battery products that have a chance of being defective. It will take about two weeks to secure parts and components and prepare new products," Koh said.

"Swapping old Galaxy Note 7 for new phones will be carried out as fast as possible. Even before that, customers will have their gadgets examined at the service centers."

The timing for the swap will differ from country to country, depending on the delivery of specific parts, said the executive, adding the exchange-related notices will be made at the earliest possible time.

"Samsung offers a sincere apology to all customers and users for the battery fire occurring soon after the release of new products," he said.

According to industry sources, Samsung's top management determined the global recall of all Galaxy Note 7 to regain consumer confidence across the world, though some company officials insisted on the partial replacement of phablet batteries.

Samsung's new Galaxy Note phablet drew attention worldwide with its iris-scanning feature that allows a user to unlock the smartphone in the blink of an eye, as well as its waterproof and dustproof functions.

But seven to eight reports of the devices catching fire while being charged have surfaced since Aug. 24, forcing Samsung to suspend its supply to local mobile service carriers by about a week later.
(END)