SEOUL, Sept. 2 (Yonhap) -- Municipal chiefs from all around the world gathered at a forum in Seoul and adopted a statement to fully implement the agreement reached by world leaders last year to better combat climate change, organizers for the gathering said Friday.

The Seoul Mayors Forum on Climate Change 2016, co-hosted by the Seoul Metropolitan Government and the International Council for Local Environmental Initiatives (ICLEI), wrapped up its two-day event, with 34 participating cities signing a declaration to support the so-called Paris Agreement. The agreement was adopted in December to replace the 1997 Kyoto Protocol on climate change.

The event held at Seoul city hall was attended by mayors from such cities as Helsinki, Tokyo, Montreal and Budapest, according to the metropolitan government.

"The phenomenon of climate change that occurs in diverse parts of the world, including unseasonable heat waves, downpours, heavy snow and desertification are not just a certain region's problem but issues that we all have to solve together," Seoul Mayor Park Won-soon said. "I hope this forum could be a platform to share experiences and a stepping stone to successfully implementing the Paris Agreement." 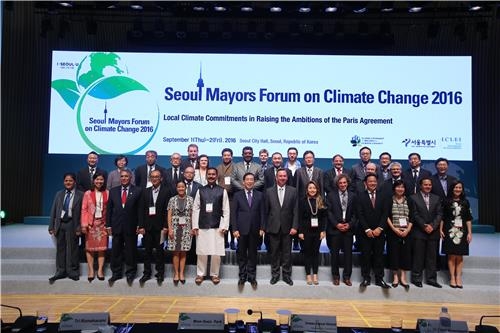 Mayors from around the world vow to faithfully implement Paris Agreement

Mayors from around the world vow to faithfully implement Paris Agreement