SEOUL, Sept. 2 (Yonhap) -- President Park Geun-hye on Friday voiced her concerns about the possibility of instability in North Korea, a source said, as she set off for an eight-day trip to Russia, China and Laos.

"The possibility of instability within North Korea is at a considerably worrisome level," Park was quoted by the source as telling Saenuri Party leader Lee Jung-hyun before boarding her plane bound for Russia's eastern port city of Vladivostok.

"The current security situation on the Korean Peninsula is very worrisome, and (we) have to bear this grave security reality in mind," she added.

Her remarks came amid Pyongyang's continued missile provocations, including its recent launch of a submarine-launched ballistic missile.

A recent series of defections by North Korean elites has raised speculation over signs of fissures in the dictatorial regime's ruling system.

During a National Security Council session last month, Park said the likelihood of unrest in Pyongyang could rise amid signs of "serious cracks" in the communist regime. 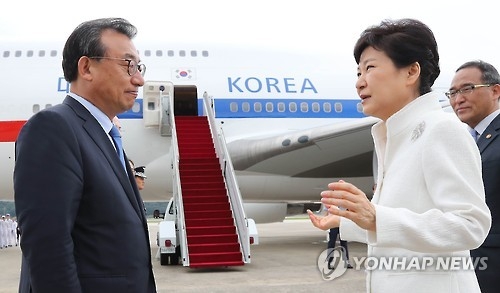