George Shultz, who served as secretary of state under President Ronald Reagan, told the Politico newspaper that he won't endorse Republican presidential candidate Donald Trump, and that he and Kissinger discussed publicly backing Clinton.

"We are going to do it together," Shultz was quoted as saying. "It will have more impact."

In May, Kissinger, who served as national security adviser and secretary of state under Presidents Richard Nixon and Gerald Ford, told Time magazine that he disagrees with Trump’s foreign policy ideas.

"On foreign policy, you identify many key problems," he was quoted as saying of Trump. "I do not generally agree with the solutions. One-shot outcomes are probably not possible." 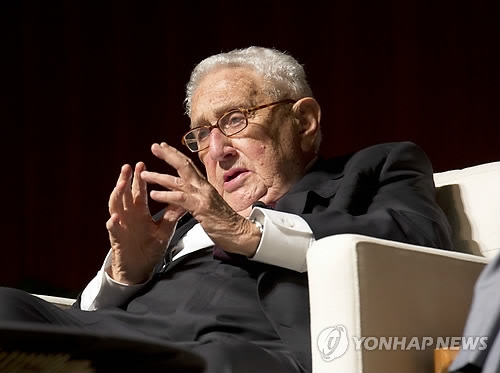 Foreign policy is considered the weakest point for Trump.

A series of former Republican administration officials and national security and foreign policy experts have adopted statements in opposition to the foreign policy views of the Republican presidential nominee. Kissinger's endorsement of Clinton is expected to be a blow to Trump.

Under his "America first" policy, the real estate tycoon has expressed deeply negative views of alliances the U.S. has with other countries as well as U.S. security commitments overseas, seeing them as a cumbersome burden sucking up taxpayer dollars.

Trump has long argued that the U.S. should no longer be the "policeman of the world," claiming it makes no sense for the U.S. to help defend such wealthy allies as Japan, South Korea and Saudi Arabia in exchange for little.

He says allies should pay 100 percent of the cost of stationing American troops, or the U.S. should be prepared to end their protection. He even suggested allowing South Korea and Japan to develop their own nuclear weapons for self-defense so as to reduce U.S. security burdens.

Trump has also expressed his willingness to hold talks with North Korean leader Kim Jong-un despite criticism such a meeting would end up bolstering the North's dictator. Trump has also praised Kim, saying it's "amazing" for the young leader to keep control of the communist nation.