Park's attendance at the South Korea-Russia Business Dialogue marked her first official scheduled event in Russia's Far East port city of Vladivostok. She arrived here on Friday for a two-day visit to attend the Eastern Economic Forum and a summit with her Russian counterpart Vladimir Putin.

Hosted by the Korea International Trade Association and the Chamber of Commerce and Industry of the Russian Federation, the meeting brought together some 350 businessmen and government officials, including 150 South Korean participants.

Among the participants were Russia's Deputy Prime Minister Yury Trutnev; Alexander Galushka, the minister for the Development of the Russian Far East; and Russian Health Minister Veronika Skvortsova. 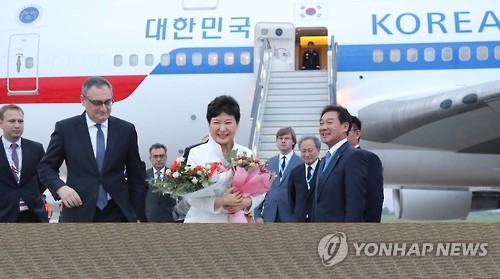