VLADIVOSTOK, Russia, Sept. 3 (Yonhap) -- President Park Geun-hye called North Korea a "disconnected node in Eurasia and the greatest threat," on Saturday, saying the country is getting in the way of Russia's Far East realizing its full potential.

During her keynote speech at the Eastern Economic Forum in Russia's eastern port city of Vladivostok, the president urged continued global efforts to pressure Pyongyang into renouncing its nuclear ambitions and becoming a responsible member of the international community.

"Although the Far East cannot realize its tremendous potential energy for now due to the disconnected node, North Korea, this region will, someday, become a bridge for prosperity and peace that links Eurasia to the Asia-Pacific region," she said. 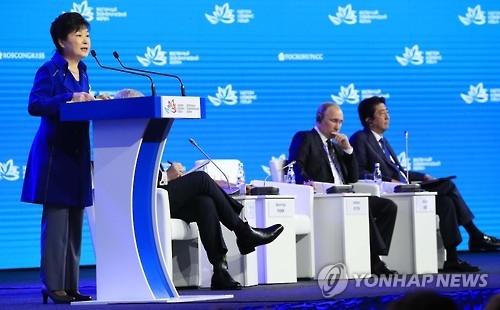 Upbraiding the communist country for ignoring its abysmal human rights record and its people's worsening economic travails, Park stressed that the international community must send a "stern and unified message" to Pyongyang against nuclear adventurism.

"If we cannot block the North from developing nuclear arms with a sense of urgency, North Korea's nuclear threats will, in the near future, become an irreversible reality," Park said

She added that Seoul, in tandem with the international community, will actively support the North should it change tack and move towards denuclearization and openness.

Her remarks came amid continued provocations from Pyongyang, including a nuclear test early this year and a submarine-launched ballistic missile test last month.

If such provocations halt, three-way cooperation projects involving the two Koreas and Russia can resume, Park pointed out.

The projects include the "Rajin-Khasan" project, a three-way logistics scheme involving the countries. The plan was bogged down after Pyongyang's nuclear test in January and long-range rocket launch the following month.

Park also used her speech to warn against a relapse into trade protectionism and isolationism, stressing that the world should pursue openness, integration and connectivity to ensure sustainable growth.

"Trade protectionism and isolationism can never be the answer (to the current economic challenges facing the world)," she said. "That is a lesson from history."

Outlining her views on international cooperation in the development of Russia's Far East, Park underscored the need for "comprehensive efforts" to create an environment conducive to sustainable development in the region.

To this end, she proposed increasing investment in food production, housing, healthcare, medicine and other sectors, which would help enhance the overall living conditions for workers and residents.

The president also highlighted the importance of further developing transportation infrastructure such as ports and roads, which would help Russia's underdeveloped region foster a new logistics center that would comprehensively link the Eurasian continent.