VLADIVOSTOK, Russia, Sept. 3 (Yonhap) -- President Park Geun-hye on Saturday left for Hangzhou, eastern China, to attend a summit of the Group of 20 (G-20) advanced and emerging economies, after a two-day visit to Russia's Far East port city of Vladivostok.

The G-20 summit will begin its two-day run on Sunday under the main theme "Towards an Innovative, Invigorated, Interconnected and Inclusive World Economy."

At the meeting, Park, along with world leaders, will discuss "inclusive and innovative" ways to stimulate economic growth, and joint efforts to address volatility in the global financial market and shore up global trade, her office Cheong Wa Dae said.

The chief executive, in particular, plans to introduce her creative economy initiative as an innovative model to prop up global growth, her office said. The president's signature "creative economy" drive aims to boost the economy by creating new business opportunities, industries and jobs through the fusion of cutting-edge technologies, culture and other opportunities.

Park will also use the gathering of world leaders to call for concerted efforts to expand free trade and curb trade protectionism and isolationist tendencies, her aides explained.

On the margins of the G-20 summit, Park will hold separate summits with the leaders of China, Saudi Arabia, Egypt and Italy.

During her summit with Chinese President Xi Jinping, Park is expected to stress the necessity of the planned deployment of an advanced U.S. anti-missile system to South Korea, an issue that has emerged as a thorn in the bilateral relations.

Seoul has argued that the plan to station a Terminal High Altitude Area Defense System on the Korean Peninsula is an "inevitable, self-defense" measure to counter Pyongyang's nuclear and missile threats. But, Beijing has vehemently opposed it, arguing it would hurt its security interests.

On Tuesday, Park is to depart for the Laotian capital of Vientiane, the third and last leg of her three-nation trip, to attend a set of meetings with the leaders of the 10-member Association of Southeast Asian Nations. 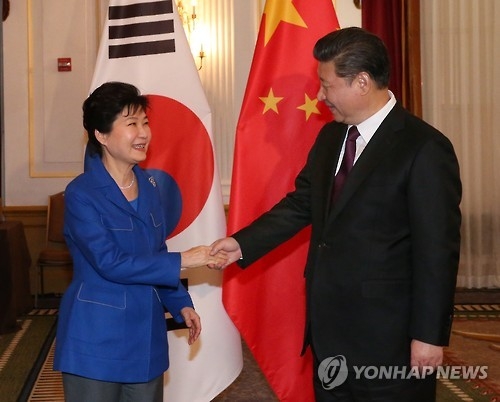