On Friday, the tech giant announced its findings that a very small number of its phones appeared to have a "battery cell issue." The head of the company's mobile business division offered a public apology, saying Samsung will recall all 2.5 million devices sold at home and abroad to date.

The world's No. 1 smartphone manufacturer said the unprecedented move reflects the company's strong belief that customer safety is paramount.

On the portal Daum, a netizen using the ID "lighthouse keeper" said it was the right decision to make despite the losses the company will incur. The recall is expected to cost Samsung about 1.5 trillion won (US$1.3 billion).

"I hope (Samsung) uses this as an opportunity to restore the confidence of consumers," the netizen wrote.

Others on the portal site Naver wrote comments such as, "Samsung Electronics has wisely chosen to safeguard its corporate image, which is larger than its immediate profit." The writer then went on to applaud the measure as a "great decision."

One Naver user also called on other businesses to follow in Samsung's footsteps when they make mistakes.

Faulty batteries have frequently become an issue with new mobile devices in the past with the USB-C connectors being linked to several fires breaking out on smartphones, tablets and even laptop computers.

The Note 7 is the first Samsung mobile device to employ the USB-C, which is capable of faster charging and data transfer compared to older systems.

Despite consumer complaints, no company has actually decided to carry out a worldwide recall.

More critical netizens, however, pointed out it was a "natural" decision on the part of Samsung which should have paid closer attention to quality management before selling their products. 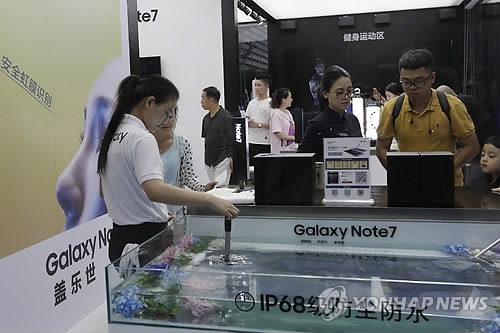