On Friday, the tech giant made a public apology for the battery problem that has been linked to some of its smartphones catching fire while charging. It also said it will recall all 2.5 million devices sold at home and abroad to fix the defective devices.

But the unprecedented recall was not something that was initially in consideration, a company official said on condition of anonymity.

"The rate of the defective devices is only 0.0024 percent of the total, which is so tiny that other companies wouldn't even pay attention to it. So, a majority of opinions at first proposed replacing only the batteries and posting a statement of apology on the company's website," the official confided.

But ardent calls by some employees for more sweeping measures to restore the confidence of consumers effectively turned the tide of opinion, he said.

According to company officials and other industry sources, it was Thursday that serious postings from the company workers in charge of smartphones began to circulate on the firm's e-bulletin board where employees are allowed to post their views anonymously. It was right after this that news reports speculated that Samsung would likely issue a full global recall of its devices. 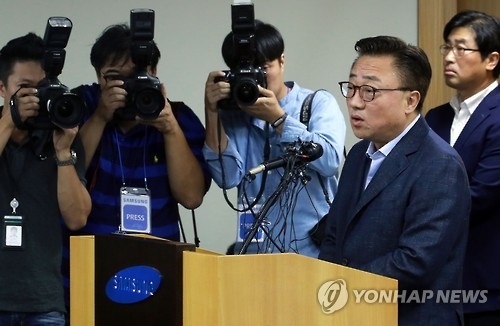 "Please exchange them with new ones after fully recalling all the devices sold. I will forego my share of the performance-based incentives, so please do so. I feel ashamed," an engineer of the company's mobile business division wrote on the bulletin board.

Workers who belong to the mobile business department were supposed to receive up to 50 percent of their annual salaries as performance-based incentives if the new phablet smartphones turned a large profit.

The posting inspired many in the company, and it quickly spread through mobile messenger applications and SNS. It was followed by writings by other employees calling the company management to move quickly to recall the faulty devices.

"We want you to make the best decision so we don't feel ashamed before our customers who use the Galaxy phablet smartphones," one said.

Another said: "The company owes much to the customers who pre-ordered our phones or purchased them. Our future lies in how well we treat these loyal customers."

Such calls got a critical boost when Koh Dong-jin, head of the mobile business division, acknowledged the problems and promised to carry out measures that can fundamentally address the issue.

"As the chief of the mobile business division, I feel ashamed for causing the problem. I will take steps that you will understand. I'm now finally checking some things with mobile phone operators. Our division will use it as a chance to maximize our attention on the quality of our products and prioritize the safety of customers. I feel really ashamed and sorry," Koh wrote.

His writing received more than 1,500 replies, according to Samsung officials.

Employees of Samsung's other divisions also joined to support him.

"I'm not a member of the mobile business division but felt there was hope while reading these replies. I could feel the division members' pride and professionalism," one of the workers wrote.

On top of this positive tide was the Samsung management, which took the decisive step.

The company's publicity team said they were ordered to "reveal all details without hiding, including all the pertinent numbers" from the management ahead of Friday's announcement of recall.

"I felt as if I had been hit by something big while reading postings on the e-bulletin board and SNS services," a company official said. "I learned the power of communications is strong."