During her summit with Egyptian President Abdel Fattah al-Sisi, Park also expressed hope that the two nations can keep up the momentum to realize the full potential for the development of their "mutually complementary" partnership.

Their meeting was held on the sidelines of the summit of the Group of 20 advanced and emerging economies in China's eastern lakeside city of Hangzhou. The multilateral economic forum kicked off its two-day run on Sunday. 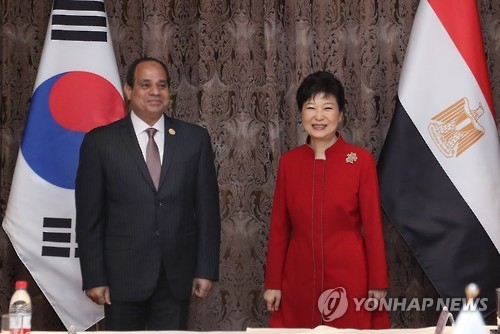 During the summit, Park, in particular, asked the Egyptian leader to support South Korean firms seeking to make inroads in the large North African market.

Currently, Egypt is pushing for a set of infrastructure expansion schemes, including a major desalination project in the country's northeastern city of Port Said and a project to purchase 520 metro trains for the capital city of Cairo.

In the metro project worth US$1 billion, a South Korean firm has been competing against a French firm. The final winner is to be selected late this year, Cheong Wa Dae said.

For the desalination project, Egypt plans to begin a bidding process sometime this month and select a winner late this year.

In response to Park's call for enhanced economic cooperation, the Egyptian leader said that he "trusts" South Korean firms, and hoped that more South Korean firms will participate in Egypt's ongoing infrastructure projects, such as the expansion of the Suez Canal and the development of new ports and cities.

The two sides also agreed to use their joint economic committee to strengthen the "institutional foundation" for bilateral economic cooperation and exchanges.

Park, in addition, asked the Egyptian leader to closely cooperate in Seoul's efforts for a nuclear-free Korean Peninsula and regional peace, while expressing her appreciation to Cairo for its active participation in the implementation of U.N. Security Council (UNSC) sanctions on a provocative North Korea.

The UNSC sanctions were imposed in March in response to Pyongyang's nuclear test in January and long-range rocket launch the following month.

The summit was the third between Park and al-Sisi. They met during the Egyptian leader's visit to Seoul in March and during the two leaders' attendance at the U.N. General Assembly in New York in 2014.